The Lower Kuskokwim School District has received state funds to demolish the Napakiak school building, which sits on the edge of an eroding riverbank. Gov. Mike Dunleavy signed the state budget bill into law on Sept. 15, which includes $3.1 million for the project.

Napakiak’s principal said that the school is within 30 feet of the Kuskokwim River during high tide. The building needs to be removed soon to avoid it falling into the river. Superintendent Kimberly Hankins said that the district plans to demolish the building this academic year, but not right away.

“We need to move through a process of one, determining which route we’re going to take, and then putting together the demo package and going out to bid for that. So that takes time,” Hankins said. Hankins spoke with KYUK in early September before the funding for the Napakiak school had been fully approved.

She said that the district hasn’t yet decided how much of the school building to demolish.

“If we did a complete demolition, then we would need more portable classroom space. But we are looking at the idea of a partial demolition and then continuing to access a portion of the existing building. But I won’t know much more on that until we actually get feedback from the architects and engineers,” Hankins said.

Whatever amount of the school is demolished, at least some, maybe all of the students in Napakiak will be in portable classrooms soon. The high schoolers have already evacuated from the main school into an unused building next door because their classroom was closest to the river. They will stay in those makeshift classrooms until a replacement school is built.

The state has not yet funded a new school, which is estimated to cost over $40 million. However, Hankins said that the state approving funding for demolition at least means that the Alaska Legislature is aware of the situation in Napakiak.

“I feel more optimistic than ever that we’re heading in the right direction,” Hankins said.

As of now, Napakiak is fourth on the state’s priority list for new school buildings. The state did not allocate any money for new school construction projects in this year’s budget. 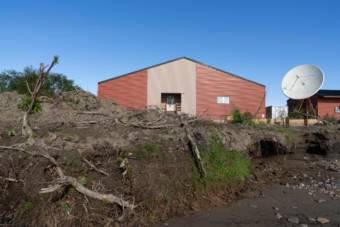 The Napakiak school sits 78 feet from the water — about the same amount of riverbank that erodes each year. 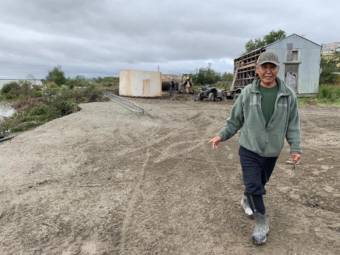 Over the next 50 years, addressing Napakiak’s environmental threats is estimated to cost over $200 million. 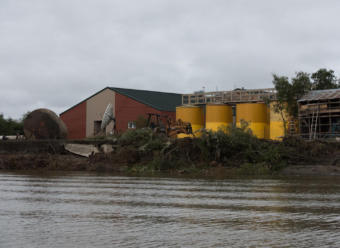 With fall storm season looming, a struggle to keep one village school's fuel tanks from falling into the Kuskokwim River