Locals in Kotzebue showed a healthy mix of excitement and concern over the weekend in response to reports that a rare polar bear was spotted in the area.

Polar bear sightings in Kotzebue aren’t without precedent. In fact, the world’s largest documented polar bear was found in Kotzebue in the 60s, weighing more than 2,200 pounds and standing more than 11 feet high.

However, polar bears tend to gather on sea ice. Catching a glimpse of one on land, in August, is pretty rare.

Lindsey Mangipane is a polar bear biologist with the U.S. Fish and Wildlife Service in Anchorage.

“It has happened before but it’s not very typical,” Mangipane said. “It’s kind of speculation as to why the bear is there now, but in most situations when this happens it’s due to sea ice retreating and the bear essentially gets stuck there.”

News of the bear sighting spread throughout town, with many curious about where exactly it was, and others hoping to get a look themselves. Lt. Scott Kellerman, a Coast Guard pilot stationed in Kotzebue, snapped some photos of the bear on Saturday evening.

“It was down by the fish camp just south of the airport, along the beach line. The bear was out in the area, just kind of sitting there.”

Kellerman says by the time the Coast Guard was made aware of the bear, local state troopers were on the scene, patrolling around the bear and advising people to stay indoors. Kellerman says he kept a healthy distance between himself and the bear as he took pictures.

“People had commented on my photo, ‘It looks like everything is kinda blurry in the background,’” Kellerman said. “And that’s because I was shooting with a super telephoto, like a 400mm lens. It allows me to stay about 200 meters back, which is pretty far. For anybody with an iPhone camera, it would look like a little blur.”

Kellerman says common bear safety includes not making any sudden movements if you’re near a bear and to stay in your vehicle. He says polar bears can be more social than other types of Alaska bears.

“They don’t have the same sort of behavior like normal bears,” Kellerman said. “They’re very interested in you, so safety is number one, especially in a town setting like this.”

Kellerman says the polar bear hung around the area south of the airport for around 15 minutes before hopping in the Kotzebue Sound and swimming north. He says he hasn’t heard of it being in the city limits since Saturday night.

Mangipane, with Fish and Wildlife, says even though it’s out of the city limits, locals should still be cautious near Kotzebue’s coastline or the surrounding outskirts.

“Carry a deterrent with you. Bear spray has been shown to be incredibly effective on polar bears, up to 95% effectiveness even in high wind scenarios,” Mangipane said. “So carrying bear spray or a firearm or some other non-lethal deterrent could be a good idea right now. Also we recommend traveling in groups. Most attacks of polar bears on people have happened with groups of two or less people, so if you are traveling, groups are a good idea.”

As the alabaster-furred visitor ventures out of town, Lt. Kellerman described the opportunity to photograph the bear as a bucket list moment for sure. 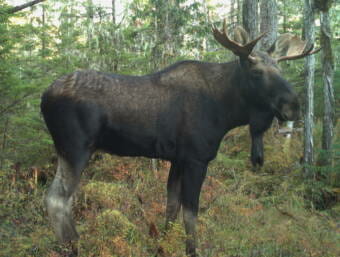 Nearly half this year’s haul, or 61 moose, came from Kupreanof Island.