“We know that this is a vessel that sank in 1989 in Women’s Bay and it’s been resting there since,” Jade Gamble, the state’s on-scene spill coordinator, told CoastAlaska on Friday. “It started leaking after the earthquake.”

She says it’s not clear how much diesel and other contaminants are on the former fishing vessel Saint Patrick.

“They’ve been able to minimize the leak,” she added. “But right now we’re going at it  — now that it’s minimized — our main goal is to ensure we don’t have some type of catastrophic release.”

The former scallop boat was hit by a rogue wave during a stormy November night in 1981 near Marmot Island. The captain ordered the crew to abandon ship; only two of its 12 crew members survived the frigid waters.

The crippled 138-foot vessel was adrift in rocky seas for several days before being towed to shore and anchored in Women’s Bay. The tragedy was the subject of lawsuits filed by survivors and families of the victims.

Authorities say the first reports of a sheen were first received less than a week after the earthquake.

The Coast Guard flew over Aug. 6 and confirmed what appeared to be a spill in about 30 feet of water.

But whether the 8.2 earthquake — the state’s largest in more than a half-century — could have been the cause isn’t clear, seismologists who have modeled the areas affected by the Perryville earthquake say.

Its epicenter was about 260 miles southwest of the Saint Patrick’s resting place in Kodiak’s Women’s Bay.

“Kodiak didn’t experience anything significant,” Alaska Earthquake Center seismologist Natalia Ruppert told Coast Alaska. “And this shipwreck being even farther away from the earthquake source, I guess it’s possible.”

Kodiak Island has also experienced major earthquakes that were much closer to Women’s Bay which would’ve produced stronger ground shaking, the most recent one in 2018, she added.

“I don’t know if this most recent 8.2 earthquake was the final straw that could have caused this shipwreck to move significantly,” Ruppert said. “Maybe it was a cumulative effect of these multiple earthquakes that over the years kind of reached a critical stage — it’s just hard to tell.”

A contractor is on scene helping with the containment, the Coast Guard said.

“Boom is in place and is being replaced as necessary along with absorbents to contain the sheening,” Coast Guard Petty Officer Ali Blackburn, a Kodiak-based spokeswoman wrote in an email.

The Coast Guard says it’s not clear who the responsible party would be as the vessel doesn’t appear to have an owner. It has activated the Oil Spill Liability Trust Fund and continues to monitor the situation.

This story has been updated with comments from the Alaska Earthquake Center. 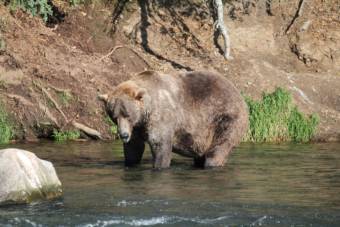 Almost 800,000 people voted this year as their favorite bears at Katmai National Park packed on the pounds for winter — over 100,000 more voters than last year. 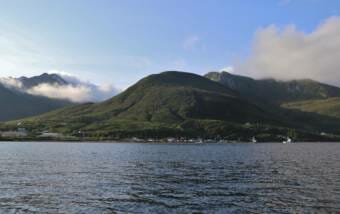