The Senate voted 69-30 Tuesday to approve a $1 trillion bipartisan infrastructure bill, a historic piece of legislation that could reshape American lives for decades.

The measure fulfills a call from President Biden for the two major parties to work together to deliver one of his top priorities, but it faces an uncertain fate in the House as progressive Democrats press for even greater spending.

Senate Majority Leader Chuck Schumer, D-N.Y., congratulated negotiators for working for months on the legislation and previewed the next political battle over additional spending.

“Today the Senate takes a decades overdue step to revitalize America’s infrastructure and give our workers, our businesses, our economy the tools to succeed in the 21st century,” Schumer said.

“Of course, we Democrats believe we need to do much more,” he added. “We are moving on to a second track, which will make generational transformation.”

The vote is a political victory for Biden, who resisted pressure from Democrats to abandon the bipartisan talks. Biden has insisted, both publicly and privately to senators, that at least a portion of his broader infrastructure and jobs agenda should have Republican support. White House staff worked closely with the core negotiators from both parties to reach the final agreement.

Vice President Harris herself presided over the Senate to gavel in the final vote tally.

The legislation includes nearly $550 billion in new spending above what Congress was already planning to allocate for infrastructure over the next eight years.

Immediately following the infrastructure vote, the Senate voted 50-49 to begin debate on a $3.5 trillion budget resolution in hopes of passing a broader package of investments that do not have the support of Republicans.

The 19 Republicans who voted for the bill did so despite pressure from former President Donald Trump to deny Democrats a victory. Trump released a statement that called the bill “the beginning of the Green New Deal.”

Republican negotiators, including Sen. Rob Portman, R-Ohio, dismissed that criticism and promoted the agreement as a huge breakthrough for the Senate.

“Everyone involved in this effort should be proud of what this body has achieved today,” Portman said on the Senate floor ahead of the vote. “The Senate is doing its job, it is doing its job by helping the American people we represent through a historic investment in our nation’s infrastructure that will serve the American people for decades to come.”

Still, other Republicans held firm in their opposition, many of whom dismissed the legislation as fiscally irresponsible. Sen. Rick Scott, R-Fla., told NPR Monday that he agrees the country needs to invest in infrastructure, but “I believe we need to live within our means.”

Scott noted that the Congressional Budget Office projected that the infrastructure bill would add about $256 billion to deficits over 10 years.

The bipartisan infrastructure legislation faces an uncertain future in the House, where a number of progressive Democrats are frustrated with what they see as the limited scope of the bill. House Speaker Nancy Pelosi, D-Calif., has said she will not take up the bipartisan measure until the broader budget bill has also passed the Senate.

Schumer told Senate Democrats on Monday that he expects committees to finish work on the partisan bill by Sept. 15, just weeks before the deadlines to increase the federal borrowing limit and approve federal spending for the next fiscal year.

The tight timeline sets up an intense flurry of fiscal negotiations that may hinge on Democrats’ ability to agree among themselves. They will need the unanimous support of all 50 Democrats in the Senate if they plan to approve any elements of the budget framework, and Senate Minority Leader Mitch McConnell, R-Ky., has vowed to oppose a debt limit increase if Democrats proceed with plans to increase spending.

“If our colleagues want to ram through yet another reckless tax and spending spree without our input, if they want all this spending and debt to be their signature legacy, they should leap at the chance to own every bit of it,” McConnell said in a speech on the Senate floor. “So let me make something perfectly clear: If they don’t need or want our input, they won’t get our help with the debt limit increase that these reckless plans will require.”

A glimmer of bipartisan agreement despite bitter political divide

The bipartisan bill came together behind closed doors even as questions about the future of the measure and threats of partisan fighting continued to simmer.

The legislation was largely negotiated by a group of five Democrats, led in part by Sens. Kyrsten Sinema of Arizona and Joe Manchin of West Virginia, and five Republicans, led by Sens. Portman of Ohio and Mitt Romney of Utah.

The group worked for weeks to identify a common definition for what infrastructure actually entails and how much the two parties were willing to invest in improvements. The talks dragged out as negotiators worked with White House staff to craft a deal that could win the support of Biden and at least 10 Senate Republicans.

Details of the bill

Lawmakers set aside the largest share of the money, $110 billion, for roads and bridges.

The Senate is expected to move quickly to begin the process of voting on the $3.5 trillion budget resolution without the support of Republicans.

Democrats plan to use the budget reconciliation process to avoid a filibuster on the remainder of Biden’s broader spending plan. That includes investments in free community college, child care, paid family leave and efforts to slow and mitigate climate change. It is unclear whether all of those provisions will be permitted under the rules to be included in the legislation.

Democrats are expected to fine-tune their plans for reconciliation over the next few months in hopes of passing a final bill by the end of this year. 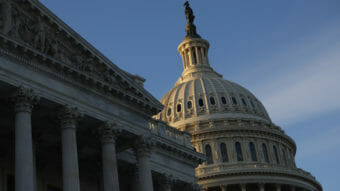