Juneau city officials are asking residents to weigh in on how they use the Montana Creek Recreation Area. They’ll use feedback from a newly released survey to help create a master plan.

Michele Elfers, Deputy Director of the City and Borough of Juneau Parks and Recreation Department, said the plan will include the Montana Creek valley, watershed, Spaulding Meadows and surrounding areas.

“Starting last fall what we really started to understand was that there’s a lot going on in this area,” Elfers said. “There’s a lot of recreation and a lot of proposals for new things and also recognizing that there’s not enough infrastructure to support what’s going on.”

She said they want to know how people use the area now and what they’d like to see in the future.

“You know, asking adults who are taking the survey, do they have children in their household,” Elfers said. “How are children using the area? If they’re not or there are activities you want to do, but you’re not doing, what kind of barriers are there?”

People use the area for things like fishing, snowmachining, four-wheeling and hiking. Elfers said the city wants to make sure the area is set up to support all that use.

“There’s already conflicts existing in terms of not enough parking,” she said. “So is that important to people that we spend future resources on parking? Should there be new trails? We’ve had different user groups ask for new trails in that area.”

The survey is just the first step in a longer process. Once the data is gathered, they’ll meet with stakeholders and user groups to determine which improvements the city will make.

The survey will be open to responses until 5 p.m. on Aug. 19 and is available online. 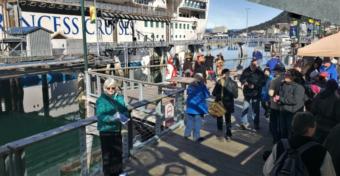 On Monday, the Juneau Assembly took one of its first substantive steps to follow through on a task force’s recommendations for managing the visitor industry.