Good afternoon, Alaksa! We have reviewed a magnitude 4.4 event at 12:40 PM, 4 miles deep and 20 miles SW of Klukwan.
This earthquake was felt across Southeast Alaska.
The event page is available at: https://t.co/Gu6Oanewe8

The Alaska Earthquake Center puts the epicenter directly under the Riggs Glacier in the park, which flows to an area in the park that is accessible to permitted boaters, backcountry campers and charter operators. As of about 2:30 p.m., a National Park Service spokesperson said some visitors and park workers reported feeling the jolt but didn’t have any other immediate news of impacts. The park service said it has 12 permitted campers Thursday in the East Arm of Glacier Bay.

As the crow flies, the closest community is Klukwan, about 20 miles to the northeast.

Fourteen-year-old Elias Kelly was playing basketball at his home a bit further up the Haines Highway when the quake struck. At first, he thought it was a big truck going by. When things kept shaking and the noise kept going, he knew it was an earthquake.

“Yeah, it was really deep rumble,” Kelly said. “The earth just kind of shook and it was like, ‘RRRRR’ — way deeper than I could make a deep noise. It was just really, really low.”

It didn’t knock him off his feet. He said no one with him was injured and he hasn’t noticed any damage. He thinks it lasted 15 to 20 seconds. Followed by a second, longer one.

“Wasn’t super-long but 20 seconds can be long time,” Kelly said.

He went back to playing basketball after.

Klukwan resident Jami Campbell said she was walking outside when it struck and mistook it for the wind blowing.

That the earthquake happened beneath a glacier probably isn’t pure coincidence.

Andy Bliss is a scientist based in Juneau with the National Park Service. He studies glaciers, among other things. He said the Riggs Glacier and others follow some of the many tectonic faults across Southeast Alaska.

Bliss said over time, glaciers tend to carve into the landscape along these faults.

“You can think about it as the earth is weakened a little bit by the tectonic fault itself,” Bliss said. “And then the glacier carves out a slightly weaker spot in the landscape. And it carves a valley in that area.”

Bliss said the reported depth of the earthquake suggests the fault caused the quake, not the glacier on top of it.

“An earthquake of this size is not necessarily going to cause any more dramatic things like a tsunami or a large icefall, or anything like that,” he said.

The same seismic instruments that pick up earthquakes would likely detect large-scale, secondary events like those, though Bliss said small landslides and avalanches are possible.

The Alaska Earthquake Center did detect a magnitude 3.3 event at the neighboring McBride Glacier a few minutes later, initially reported at a depth of zero. Earthquake Center seismologist Natalia Ruppert said Friday that it looked like an earthquake, not a glacial event. She said the depth is likely to change after the event is reviewed and analyzed.

This story has been updated with comments from a National Park Service scientist and Alaska Earthquake Center seismologist. 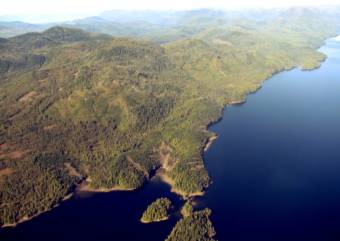 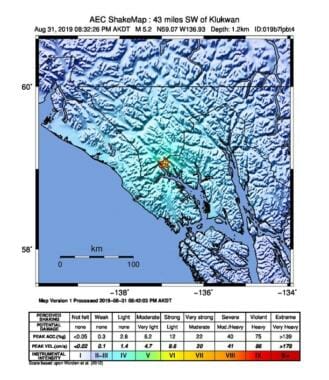