A critical lifeline for the Southeast hamlet of Meyers Chuck is sinking.

The tiny community is about 50 miles south of Wrangell proper but still within the borough boundaries. It’s only accessible by boat or float plane, and the planes are especially important for mail deliveries and medical emergencies. But Meyers Chuck’s docks, including where float planes land, are slowly going under.

Wrangell Borough Manager Lisa Von Bargen explained that sinking docks have been a problem in Meyers Chuck for around a decade. And she says Wrangell’s government has failed to meet its obligation to do maintenance on the docks and floats. So to save the hundreds of feet of sinking dock, Meyers Chuck residents made multiple repairs themselves.

“Because we had not done anything about it,” Von Bargen told the assembly last week, “the citizens went and bought their own barrels and installed them, with their expertise and their labor, installed them under the dock — more than 100 of them the first time, and I think about 30 of them this round, and put them in to make sure that that dock remained floating.”

At a meeting last month, Wrangell’s borough assembly approved almost $8,000 to reimburse Meyers Chuck residents for dock repairs. But Von Bargen says help with their docks is  really all that residents of Meyers Chuck want. In their estimation, Wrangell’s water system is worse than their own.

Von Bargen says the harbor department is working as quickly as possible to replace the failing airplane float. It will also begin the process of fully replacing the float system under all of Meyers Chuck’s docks. 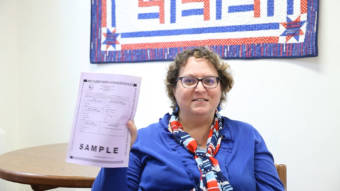 How to vote by mail in Juneau: An election official answers your questions

For the second year, Juneau’s local election will be held by mail. Here's how that works.