When people think of trailer homes, many envision shoddy construction and unhealthy living conditions. But in places like Sitka where construction costs are high and land availability is low, they’re an important affordable housing alternative.

For one Sitkan, renovating a trailer provided a path to debt-free home ownership, and this resident is not the only one looking beyond the stigma of trailer living.

Robin Schmid’s black and white border collie Lady greets me at the door of her olive green trailer home. The mouth of the Indian River spills into Sitka Sound outside her kitchen window.

It’s not just the scenery that’s inviting. Inside, the nearly 900-square-foot home looks like any modern apartment or house. It’s bright and tidy, with hardwood cabinets and new appliances.

“I’ve had a lot of people come over, and they’re just absolutely stunned when they come in,” she said.

Schmid hasn’t always lived in a trailer. She used to own a big house with land in Wasilla, and it had a big mortgage to go with it.

But a few years back after a divorce, she decided to make a change toward a simpler life. She was old enough to withdraw some of her retirement, and she started asking herself where she wanted to live and what she wanted to do next.

“And I just kept coming back to the idea that being self-employed was the only thing that really worked for me after being an attorney for over 25 years, and the place that I really wanted to live was Sitka. I really wanted to come back to Sitka,” Schmid said. “And I wondered how I could possibly afford to do that.”

When Schmid lived in Sitka before, she’d rented, but it was tricky to find a place that could accommodate her teenage son, her dog and cats. She looked at buying a house, but even places that needed a lot of work were out of her price range. Then she got a call from a friend asking if she’d be interested in a trailer that a local contractor wanted to sell.

“And we did a walk-through and the place was — whew,” she said. “It’s 1984, and there was the paneling. So it was really, really ugly. And I said I only want the place if you gut it to the studs. I mean new floor, new ceiling, new walls. I said I don’t want to see any paneling anywhere.”

Finding a bank to finance the trailer renovation was a challenge, so they drew up their own contract and payment plan. He replaced everything from the windows to the countertops, and the fully renovated trailer cost Schmid just $75,000. That’s around a fifth of what she would’ve paid for a house that still needed a lot of work.

She does have to pay a couple hundred dollars a month to rent the lot in the trailer court, but she said that’s nothing compared to a mortgage. Besides, she said, owning land comes with extra responsibilities like maintaining the road or dealing with the electrical meter, and she doesn’t mind having neighbors close by.

And the smaller space isn’t a problem either, as long as she stays organized. She even runs her legal practice out of her home.

“It’s comfortable enough that if I want to stay here, retire here and die here, I think I could that,” she said.

But despite Schmid’s success story, everyone from her plumber to her father has voiced skepticism. She thinks there’s a stigma against trailers that doesn’t exist for other affordable housing alternatives like tiny homes.

“There’s been the belief always is that trailers don’t last,” Schmid said.

Although many of Sitka’s trailers are shoddy and unhealthy, especially those built prior to 1976 when the Department of Housing and Urban Development introduced construction standards, Sitka Building Official Pat Swedeen said many people are pleasantly surprised at the quality of new manufactured homes.

“They’re not built like they used to be. They’re built with much thicker walls. They have insulation equal to what a typical stick-build home,” Swedeen said. “I think that’s an avenue that isn’t getting enough attention in my mind when it comes to really trying to talk about affordable housing.”

Developer Jeremy Twaddle owns Mountain View Estates. He’s slowly expanded the trailer court since he bought it nine years ago. He barges the manufactured homes from down south, installs them on a permanent foundation, and sells them move-in ready.

Even with the cost to ship the home and rent the lot, he said the price per square foot is about half of what someone would pay for a regular house in Sitka. And people have noticed. The remaining spaces are already promised to buyers, and the trailers haven’t even arrived yet.

“I’d say in the last year, there’s been a real uptick in this type of housing I think due to the affordability. And not only in Sitka, but kind of nationwide, the manufactured home builders are backed up about nine months in construction right now,” Twaddle said.

He said getting a loan to buy a trailer can be a challenge, but in Sitka, ALPS Federal Credit Union offers financing.

A bigger hurdle is land. There’s not a lot ripe for development in Sitka anyway, and because of zoning restrictions, the space for trailer courts is even more limited. He said if the land was there, he’d keep bringing in manufactured homes because, as a lifelong Sitkan, he sees the need for affordable housing and the gap that trailers can fill.

“And I don’t think it’s a one-size-fits-all-type scenario,” Twaddle said. “I remember people always had manufactured homes and that’s what they lived in until they could pay that down and take that chunk and put it in on a stick-built home and work their way up from there. Just wanting people to stay in Sitka and succeed and not get run out of town because there’s only rental options or the homes are just too expensive.”

For Schmid, that’s exactly what her trailer provides: a way to stay in a place that she loves and the freedom to live her life the way she wants.

“I feel like I’ve gotten my life back without the debt hanging over my head,” Schmid said. “It’s about freedom to me.”

If she ever decides to move, she thinks she could get her money out of her renovated trailer and then some. But if not, she said, she’s gotten her living out of it. 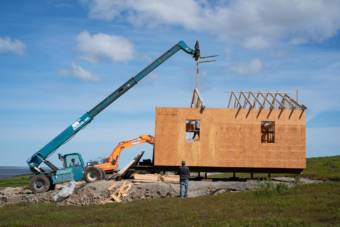 Lumber prices have been soaring across the country as demand for wood during the pandemic outstripped supply. 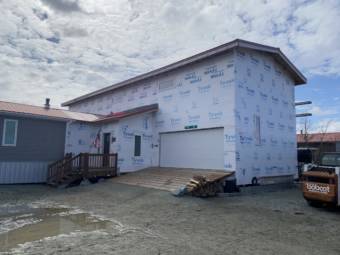 In Bethel, a B&B dispute points to larger housing problems

Some in Bethel say the city could start losing essential services if it starts shutting down B&B's, which house many transient workers.