In Alaska, repatriated remains can range from an individual bone or skull up to hundreds of sets of remains.

Between 1910 and 1941, Czech anthropologist Aleš Hrdlička curated the U.S. Museum of Natural History.

In the 1930s, he removed the remains of more than 1,000 individuals and funerary objects from Larsen Bay and brought them to the Smithsonian Institute.

In the early 1990s, the Smithsonian Institute returned many of those remains to the community.

“It was the first time where our people really began to understand why it was so important to have control over our own cultural heritage and by extension, our ancestral remains,” former Larsen Bay resident and Alutiiq Museum executive director April Laktonen Counceller said. “It took years and lots of lawyers.”

That repatriation request process began in 1987, and hundreds of those ancestors were put to rest in 1991.

The Smithsonian repatriation isn’t covered under the Native American Graves Protection and Repatriation Act, or NAGPRA. Instead, the Smithsonian based its policy on a 1989 law that authorized the National Museum of the American Indian.

One of the criticisms of the Native American Graves Protection and Repatriation Act is that it puts a huge burden of proof on Tribes, which may not have access to the necessary records.

On top of that, the people who took those remains or other objects didn’t always keep the best records.

Worl also worked in the Harvard Peabody Museum and served on and chaired a review committee that worked toward repatriation. She also initiated several repatriation claims, including repatriation of a totem pole taken from Southeast Alaska in 1899.

“We even had a repatriation claim from there with a big ceremony,” Worl said. “I think we repatriated one of the Harriman expedition totem poles. It was from Saxman.”

Worl has sat on both sides of the repatriation table.

“In my time on the review committee, I was in meetings across the country. And it was just heartbreaking, and you know, almost every meeting where we would have Tribal members begging for the return of their ancestral remains. And in NAGPRA we do have this term called culturally unidentifiable human remains,” Worl said. “According to the records, they couldn’t figure out where those these ancestral remains came from. And so Native Americans across the country would be just pleading, you know, please return our ancestors.”

Worl says that Tribes have to provide “the preponderance of the evidence.”

“I will tell you that initiating a repatriation claim is quite expensive — and especially if it should rise to a dispute,” Worl said. She had to recuse herself twice when the NAGPRA review committee she served on had to handle disputes. She says those disputes cost more than $100,000.

And she says museums aren’t always forthright with sharing documentation.

Sometimes remains and objects are collected by federal and state agencies and then turned over to a university or museum.

One of those repatriation priorities for the Alutiiq Museum was the return of ancestral remains from Chirikof Island, which is about 100 miles southwest of Kodiak.

Alutiiq Museum executive director April Laktonen Counceller — who is a Tribal member of the Sun’aq Tribe of Kodiak — says many of the remains were from a Russian Orthodox graveyard that eroded onto the beach.

Chirikof Island was managed by the U.S. Fish and Wildlife Service. Following excavation in the 1960s, the remains were taken to the University of Wisconsin.

“They were kind of shipped around and traded around with no surviving documentation and ended up at Indiana University at Bloomington, which was not incredibly cooperative,” Counceller said.

Counceller says the Alutiiq Museum sought the release of those ancestral remains for about 15 years before the Department of Interior’s legal division became involved.

“It was a difficult thing to be there for — the final part of that struggle to get those ancestors returned because we felt like we weren’t being heard,” Counceller said. “The archeologist who had possession of the remains seemed to feel that it was their life’s work or have some sort of ownership over the story of them. We asked for copies of all of the research, documentation on the remains and the catalog, which we knew they had, and they refused.”

That’s when the Army Corps of Engineers performed another cataloguing of the collection.

Even the bishop of the Russian Orthodox Church of America got involved. He sent a letter of support asking for the return of the remains so they could be reburied — and for the records to be released.

“That whole situation made me, as a Tribal member, feel a little bit traumatized because we see these people as our ancestors,” Counceller said. “We also had done research into the Russian Orthodox Church records and found the names of people who had been buried in that graveyard in the 1800s. Some of them had living descendants.”

Counceller says the repatriation process can begin a couple of ways.

“Sometimes we get notified by an organization or a museum or university that they’re putting something into the federal register,” Counceller said. “Sometimes we get contacted by our local Tribes for assistance, and in some cases it’s because they don’t really know exactly how to go through that entire process. We also keep a sort of a running list of places that we know of that have ancestral remains from our region. And so we kind of just keep an eye on it, in some cases in the past.”

The Alutiiq Museum isn’t a Tribal organization. It’s Tribally run and Tribally led, but it doesn’t have the Tribal standing to directly negotiate repatriation claims — unless they’re doing so on behalf of a Tribe.

But the museum does keep up-to-date on potential notices.

“As part of a project we’re working on right now, I’ve been looking through those notices and finding some that we weren’t even aware of,” said Amanda Lancaster, the museum’s collections curator.

The NAGPRA registry is available online and searchable by state or region or institution.

Shannon O’Loughlin is the executive director for the Association of American Indian Affairs. She says items can be categorized in a way that creates uncertainty of which Tribe or Tribes to reach out to.

“One of my criticisms of the law is the way it’s written is for summaries that the institution does not have to consult with Tribes to determine what is going to be in its summary,” O’Loughlin said. “That means before consultation, it’s determining what it thinks are sacred objects, objects of cultural patrimony and associated funerary objects.”

On the NAGPRA registry, Harvard’s Peabody Museum lists at least one instance in its collection of culturally unaffiliated remains — coming from the Aleutians West region.

In Alaska, remains are located at the medical examiner’s office, the Museum of the North on the University of Alaska Fairbanks campus and other locations.

But ancestral remains from Alaska are spread out from California to Connecticut.

NAGPRA and most U.S. laws don’t cover the remains that came from outside of what are now colonially imposed borders.

Nor do those laws cover remains and objects that were taken from the U.S. and moved internationally.

“The museums outside of the United States that may or may not have ancestral remains from our area are not subject to United States laws,” Alutiiq Museum’s April Counceller said.

The law also doesn’t require museums or universities to return items for repatriation in any specific way.

So remains of ancestors may be returned in a box — and in some cases, boxes separated into similar parts. A community may get a box of skulls, a box of femurs, et cetera.

One example, Alutiiq Museum director April Counceller says, was during the Chirikof repatriation.

“When people get the remains back, they’re not coming back in coffins. They’re not coming back in the way that we are accustomed in the modern day to see our dead be treated,” Counceller said. “I think that helped the broader community that knew about the situation — that helped them to understand, you know, you wouldn’t like to see your family member come back in individual cardboard boxes.”

And so communities try to give their Elders and ancestors rest in the most respectful way possible.

For Kodiak, the Alutiiq Museum worked with the city and local Tribes and Native corporations to create Ancestors Memorial Park.

Some Native communities don’t allow practices to handle ancestral remains — and so sometimes elect to allow a museum to store them in the meantime.

“There are certain things which are under control of the federal government, which are in our collections, and many things have been repatriated,” Deloria said. “Some human remains remain in our collection at the request of discretion of Tribes who have completed the process with us. And then there have been an interesting number of cultural objects, you know, in which there has been exchange.”

Almost 100 years after a Teikweidi totem pole from Southeast Alaska was removed, the Peabody Museum helped repatriate it.

The Cape Fox Corporation donated a cedar tree as a gesture of appreciation, and the museum commissioned Tlingit master carver Nathan Jackson to carve the tree into a pole — the Kaats’ Xóots Kooteeya or Kaats’ and Brown Bear totem pole s a symbol of the Saanya Kwaan Teikweidi clan and history — but also the relationship between the Saanya Kwaan and the Peabody Museum.

“I take my students in to the museum and a lot of Native students, you know, it’s an uneasy experience for those students,” Deloria said. “We stop at the Nathan Jackson pole, though, and talk quite a bit about what collaboration means and the ways in which can be really productive for everybody who’s involved. But it feels to me like things have gone well with Alaska in the past and we look forward to doing more in the future.”

But as more universities and museums examine colonization’s dark history and its impact on Indigenous people, many make greater efforts to consult with Tribes in an effort to bring ancestral remains home.

This is the first of a three-part series. The series in its entirety and an extended audio podcast can be found at knba.org. 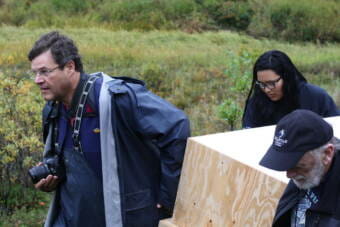 Tribes, Native organizations push back at institutions reluctant to help with repatriation efforts