More than 80 seismic monitoring stations went dark in Alaska on Friday as a national project comes to an end. But the work leaves behind a more robust earthquake monitoring system than ever before.

If you ask Alaska Earthquake Center Director Michael West, he’ll tell you that what matters isn’t how many seismic stations the state is losing, but how many it gained.

“More than 100 of those are staying behind and they have already become part of our long-term earthquake and volcano and tsunami monitoring infrastructure,” he said.

The seismic stations are part of the U.S. Array, a multi-million dollar national research project. It spanned nearly two decades and the entire continent. The goal was to monitor seismic activity and better understand the ground under our feet. Transportable seismic stations started on the west coast and moved east, then doubled back to their last stop: Alaska.

“Think of it like a kids science fair project or something, you go out, you do an experiment, you collect some data, and then you pack up, go home and move on to something else,” West said.

“Somebody came along and did a really cool $50 million, you know, site short-term seismic experiment. But that plan always had in it, that at the end of the project, the lights would be turned off … and the project would be over.”

Except more than half of the equipment that should go home is staying in Alaska. That’s due to a big push from the scientific community and the state’s federal delegation. West says to think of it as the stations just getting thinned out a little bit.

He says the system brought earthquake monitoring and recording capabilities to huge swaths of the state where very little had existed before — filling in the details of what was once a sketchy understanding of certain regions.

“I can remember discussions a decade ago, where, you know, well-intentioned engineers thought, ‘oh, they’ll never be able to pull this off. This is too big and scale. This is too grandiose.'” West said.

Kasey Aderhold is a project associate for the Incorporated Research Institute for Seismology,  one of the national research groups responsible for the project. She says taking dozens of far-flung research stations in some of the most remote parts of the continent offline is actually pretty simple.

“It’s basically like calling up your cell phone provider and saying, I would like to cancel my line,” she said with a laugh.

They’ll just stop transmitting. Later this summer, scientists will visit the sites and pack up the equipment. That part is more complicated. Aderhold says because of the pandemic, they even got an extra year of data.

“It’s been an amazingly productive time, geophysically, in Alaska to have this network there. Alaska always has had a lot of earthquakes, a lot of volcanoes and other things, but the past years where this network has been in place have been extraordinarily busy,” she said.

The array captured data from Kaktovik earthquakes in 2018, a magnitude 6.4 rumbler on the North Slope, 2018’s Anchorage quake, and some magnitude 7 quakes in the Aleutians.

West says the end of the project is bittersweet for Alaska Earthquake Center.

“Kind of sad, it is. But there are just an unbelievable number of people who should be, you know, thanked and back slapped and all that stuff for their incredible vision and efforts to change — fundamentally and forever — change Alaska’s seismic monitoring environment,” he said.

The legacy of the U.S. Array in Alaska is a more robust earthquake monitoring system and years of data whose impacts have only begun to rumble through the scientific community. 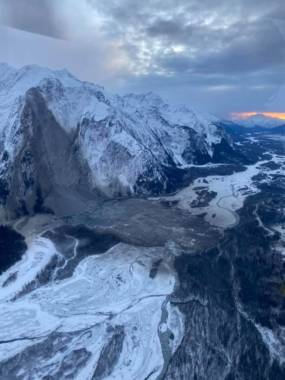 When all that rock fell, it shook the earth equivalent to a magnitude 2.8 or 2.9 earthquake. 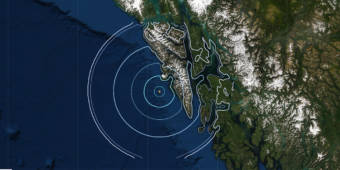 The earthquake’s epicenter was around 15 miles deep and occurred on the Queen Charlotte Fault.

Coastal communities safe after major earthquake and threat of a tsunami

State seismologist warns against a "false sense of security."