The commercial and subsistence herring seasons in Sitka have drawn to a close. But the legal case between Sitka Tribe of Alaska and the state continues, with a Juneau Superior Court judge recently denying Sitka Tribe’s motion for summary judgment on constitutional grounds.

Last fall, the Sitka Tribe of Alaska won two victories against the state in the fight over its management of the Sitka Sound Sac Roe Herring Fishery. And in January, the legal team representing STA made its third case, arguing that the state had not met its constitutional duties in its operation of the fishery. Juneau Superior Court Judge Daniel Schally denied STA’s claim in a ruling issued last month.

During oral argument in January, attorneys representing STA argued that the Alaska Department of Fish and Game is required under certain clauses of the Alaska State Constitution to use the “best available information” when making management decisions about the fishery. They argued that the state had not used the “best available information” during the 2018-2019 season when it failed to provide a subsistence harvest data report and a scientific study reviewing the state’s model to the Board of Fish.

After the hearing, it took Judge Schally nearly eight weeks to issue a ruling. In his 13-page decision, Schally wrote that the state’s constitution does not require the Alaska Department of Fish and Game to use the “best available information.”

Schally wrote that if there was a requirement for “best available information” in the state’s constitution, it would not be up to the courts to decide what that is.

Schally cited one example – Kanuk v. the State Department of Natural Resources. In the 2014 case,  a group of youth sued the state, arguing that the state was violating its constitution by not using the “best available science” to mitigate climate change. The judge dismissed the case and determined that the state’s legislative and executive branches should define “best available science” rather than the courts.

Schally wrote that “the legislature has the knowledge and ability to draft statutes” that would require the Alaska Department of Fish and Game to use the “Best Available Information.”

KCAW reached out to attorneys from the state and STA for comment on the ruling. In an email to KCAW, Assistant Attorney General Maria Bahr wrote “The [state] Department of Law is pleased with the decision and we believe the case is nearing conclusion.”

According to court documents, both parties along with intervenors in the suit are scheduled to appear in court for a pre-trial conference next month, with a trial date set for June 1. 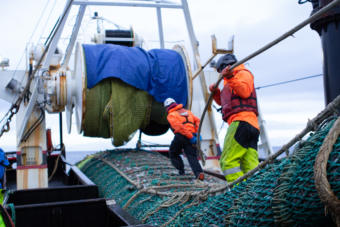 It is still a mystery to state biologists why king and chum salmon numbers are decreasing in Western Alaska. But ask any local fishermen on the Kuskokwim, and they’ll likely tell you commercial fishing trawlers in the Bering Sea are the problem.