The Kenai Peninsula Borough will go through with purchasing and leasing several ADA-compliant voting machines, six years after a complaint from a vision-impaired Homer man triggered a reassessment of voting accessibility on the peninsula.

The plan to buy several Dominion Voting Systems machines and lease over two dozen others was primarily a response to that complaint. But it became controversial when former President Donald Trump and his followers made Dominion a target late last year, claiming without evidence that the 2020 election was rigged.

Borough IT manager Ben Hanson said the new machines are largely the same on the backend.

That includes a screen reader that dictates ballots aloud and a “sip and puff device,” allowing voters to send signals to the machine by inhaling and exhaling.

Those technologies weren’t available in 2015, when Richard Malley lodged his complaint with the Alaska State Commission for Human Rights. Malley, a former Homer resident with impaired vision, alleged there was not an accessible voting machine available for him when he went to vote in the borough.

The commission agreed and told the borough to fix the problem. The borough convened a stakeholder group, which made several recommendations to make voting more accessible.

One recommendation was the borough provide accessible voting machines at every voting location on the peninsula. The borough got quotes from both Dominion and Election Systems and Software before going with Dominion.

Several people at Tuesday’s assembly meeting asked the borough to hold off on approving the purchase from Dominion. Annette Pankoski said she’s been reading about the machines.

“I’ve tried to read over it myself and to get a handle on it because it’s a lot,” she said. “But the whole intention of it was to show that there are fraudulent issues with the Dominion voting machines.”

Assembly member Bill Elam said he originally was worried, too, but not after doing his research.

“I’m an IT professional,” he said. “That’s what I spend my career doing and I have spent a ton of time researching this, going through all the details. I want our election to be beyond reproach. I will personally vote for the Dominion system even though I’ve read the same articles you guys have.”

Borough staff also tried to assuage fears by walking people through the voting process. Clerk Johni Blankenship said they check for discrepancies after an election.

“It’s not as if anyone is voting and those votes are kind of going off into the ether and that they can somehow be changed,” he said.

The only assembly member to vote against the purchase was Richard Derkevorkian, who said he heard too many concerns from his constituents.

The ordinance authorized the borough to purchase 10 machines for its in-person absentee voting locations. Those machines would cost just over $100,000.

The borough will lease 26 machines for its remaining polling locations, for almost $149,000 annually. Blankenship said that’s so the borough can first make sure it likes the machines before making a big purchase.

Separately, Elam and Bjorkman successfully sponsored the adoption of new pre-election policy, including a “security risk and vulnerability assessment” by an independent IT provider. Bjorkman said he wants to ensure there’s confidence in the system ahead of the October election. 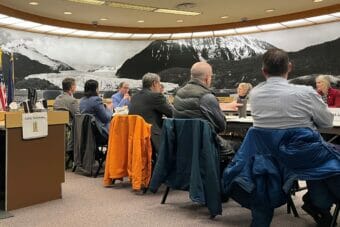