The head of Ketchikan’s school district turned in her resignation Friday afternoon. Tribal leaders have been calling on the district to replace her in recent months.

It’s been a turbulent year for Ketchikan Superintendent of Schools Beth Lougee.

Last summer, as schools grasped out to reopen amid the pandemic, Ketchikan’s school board overruled her reopening advice after several tense town halls and hours of testimony. It eventually forced the district to resume full in-person instruction in September.

Later that winter, she was roundly criticized by tribal members and parents in the district who said she’d given short shrift to Alaska Native education. Ketchikan Indian Community’s elected Tribal Council late last year expressed “no confidence” in Lougee. The tribe says it had never made such a call before. But a publicly circulated photo of an Alaska Native cultural educator sitting on the floor because she had not been issued furniture angered parents and other community members.

Then there was personal tragedy: she and her husband both contracted COVID-19 in over the winter. Her husband did not recover.

“With my husband passing away in January, and then, with my own health scare, it was just — it just feels like it’s time for me to focus on my own wellbeing and take the year off and kind of refocus,” Lougee said in an interview Monday.

Lougee declined to say what role her critics played in her leaving more than a month before the end of the school year.

“Again, I — you know, the focus was on me, and I have no further comment on that,” Lougee said.

School Board President Kim Hodne says it’s not yet clear who will take over next month. He says he intends to bring the question to the full board.

“We’re not going to make snap, jump decisions just to make a decision,” Hodne said. “This is going to be a thoughtful process. By the end of the week — we have until May 1 to make that decision. So I want this to be a good decision, and one that’s understood by the board and agreed by the board. And we’ll go forward in that respect.”

The school board is scheduled to meet at 6 p.m. Thursday for a work session on next year’s school district budget. There’s a regular meeting scheduled for the following Wednesday, April 28.

Lougee took over as interim superintendent after the prior top administrator, Bob Boyle, resigned in the wake of a sex abuse scandal a that saw district teacher arrested and contentious negotiations with the local teachers’ union.

Lougee had previously served as the district’s curriculum director after relocating from New Mexico, where she faced formal labor complaints. Lougee has denied the allegations.

After Ketchikan’s school board spent months debating whether to launch a wider superintendent search, the board gave Lougee a two-year contract in 2020. Her annual salary was set at $145,000.

Lougee says she plans to remain in the Ketchikan area until at least August, when she’ll assume care of her grandchildren in Wyoming while their mother is deployed overseas with the military.

Hodne, the school board president, says he’d like to see the next superintendent be someone already living in Ketchikan.

“We’d love to see someone from within the community step up and fill this position,” Hodne said. “But having said that, of course, it’s going to be open. There may be somebody out there that just strikes everybody, hey, this is a great fit for us. We will go through the due process.”

Hodne pledged that the search would be open and transparent. He says he’d like to see a public meet-and-greet with the top two or three candidates.

And he noted that Ketchikan’s tribal government has a formal role to play.

“We have an MOU — memorandum of understanding — (that) was signed with KIC a year or so before I came on the board, and they actually are, through that MOU, a part of — they have a seat at the table, if you will, in that process,” Hodne said.

That agreement gives the tribe a fifth of the seats on district hiring committees, which recommend top candidates to the school board, who will ultimately offer the position to the final candidate.

Lougee, who was first hired by the district in 2017, offered some parting advice to her successor.

“Be patient and just continue to work closely with the school board and really, really focus on what’s best for students,” Lougee said.

Hodne says he wishes the departing superintendent well and hopes she finds time to relax. 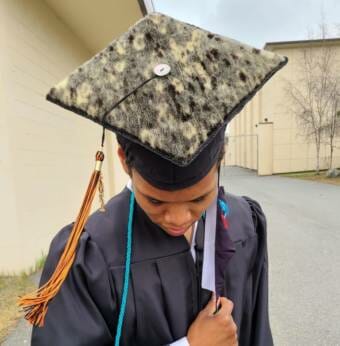 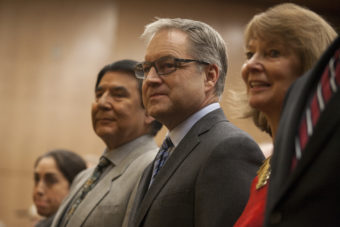