The U.S. Army Corps of Engineers will reconsider its decision to deny a permit for the proposed Pebble Mine.

The agency has accepted an appeal application from the Pebble Limited Partnership. The Army Corps says the application is sufficient to begin an administrative appeal.

The Corps decided in November that Pebble’s plan to mitigate the environmental damage was inadequate and that the project doesn’t serve the public. The open-pit gold mine would be among the largest in the world. The site is upstream from Bristol Bay.

The agency rejected an appeal from the state of Alaska. The state has no standing to appeal because it’s not the permit applicant, the Corps said. Gov. Mike Dunleavy says the state should be able to appeal because the mine would be important to the state’s economy and would be built on state land. 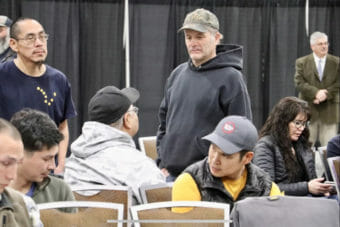 With hope and frustration, Bristol Bay awaits the EPA’s final verdict on Pebble

The agency’s assistant administrator for water has 60 days to decide whether to impose the veto, make would effectively kill the mine.