Sitka has become a hot spot for landslide research since a deadly landslide hit the town in 2015. Much of that work has focused on landslide mitigation, including developing a landslide warning system. But a recent study in the Tongass National Forest headed in a different direction to examine how landslides impact the global carbon cycle.

How carbon moves around our planet is of particular interest to the scientific community.

“Part of that is because carbon in the atmosphere is contributing to global warming, and we want to understand carbon pools and where carbon is stored and how carbon is transferred from say the vegetation to the oceans to the atmosphere,” researcher Bryce Vascik said.

Vascik received his master’s degree in geology from Portland State University last fall and for his thesis, he honed in on a little-studied part of the carbon cycle — landslides.

“Carbon mobilizing events by landslides is not a super studied area,” he said. “It’s sort of a niche field within the carbon cycle.”

The Tongass is one of the largest forest carbon sinks in the world. That’s because its soils and vegetation — despite intensive logging in some areas — have been largely undisturbed by human activities in comparison to other places. Vascik said that made it an ideal setting for his research.

“Because landslides occur pretty much annually within the Tongass, and it’s very carbon dense. So it’s a pretty ideal natural laboratory,” he said.

Through a combination of fieldwork, remote sensing technology and computer work, Vascik estimated the amount of carbon being moved around by landslides in Southeast Alaska. He found a single storm that triggers multiple slides can move as much carbon stored in vegetation and soils as the annual emissions from 45,000 vehicles. But it doesn’t necessarily go into the atmosphere.

Instead, much of it is deposited in valleys or farther down hillsides where it gets buried and sequestered for long periods of time. About 20% ends up in water, including rivers, which can then carry it to the ocean’s continental shelf and bury it for millions of years. It’s possible that landslides actually help keep carbon out of the atmosphere, but Vascik said more data is needed before they can say that for sure.

“I wanted to be like the carbon’s being moved by the landslides, and if enough is being moved and buried, then this is good for humans in the context of global warming,” he said. “But there isn’t enough research as to what occurs to the carbon after it is mobilized and deposited.”

Vascik’s research was part of a broader study funded by the National Science Foundation that looked at how landslides and the characteristics of forests influence one another. Portland State University’s Adam Booth headed up that project in partnership with the Sitka Sound Science Center and former University of Alaska Southeast and current University of Colorado Denver professor Brian Buma. Booth was also Vascik’s thesis advisor and said Vascik’s work is part of a broader effort to understand how climate change, the carbon cycle and landslides interact.

“How does changing temperature and precipitation affect landslides, how do those landslides affect carbon, and then ultimately over a long time, what that carbon mobilized by the landslides is doing, where it goes, where it ends up getting deposited, affects Earth’s global carbon cycle over geologic time periods,” Booth said.

Another part of the team’s work, which was published in a study last year, looked at how far landslides move from their source. They found that Southeast Alaska landslides don’t move nearly as far as others around the world. That means homes and infrastructure are less likely to be impacted by slides that happen on slopes high above developments. The reason is that large trees uprooted and carried by landslides lock together and keep the flow from continuing further downhill.

“Another reason old growth forests are important and interesting. [They are] for a number of reasons, but there’s a very practical reason in terms of the hazard,” he said.

Vascik said he plans to publish his study in a bio-geosciences journal in the next few months so the data can be available to other researchers looking at landslides and the carbon cycle around the world. 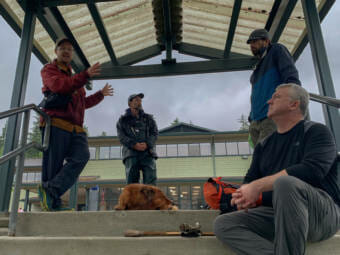 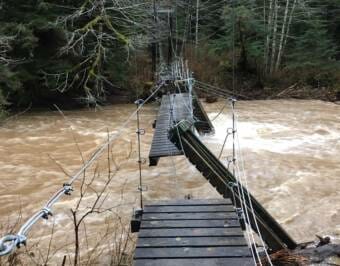 The 100-person town of Tenakee Springs is turning to crowdfunding to rebuild a bridge destroyed during record-breaking storms last December.