A network failure on Monday evening has rendered the Coast Guard’s emergency VHF radio channel unreliable across much of Southeast Alaska.

Coast Guard Commander Lyle Kessler said mariners calling on Channel 16 may have trouble getting through to watchstanders. That’s because the region’s VHF repeaters are either inoperable or are unreliable due to a network failure in a swathe from Yakutat to south of Ketchikan.

The Coast Guard operates a system of VHF repeaters that allow radio broadcasts to be relayed across Southeast Alaska’s narrow inlets and around tall peaks.

“If the tower’s down and you try to call us on [Channel] 16 it makes the tower not relay the message back to us,” Commander Lyle Kessler, a Coast Guard spokesman in Juneau, told CoastAlaska.

Several VHF repeaters have been down for more than a year. But the situation had been improving after a new contractor was hired to service the system.

But a new issue with AT&T’s microwave network developed this week. Kessler said even VHF towers that are functioning are only broadcasting intermittently.

“They’ll go down for anywhere from a few seconds to a few minutes, then come back up,” Kessler said. “And then we also have the towers that have been down for some time due to the previous issues.”

The Coast Guard is advising mariners to carry an alternative means for sending distress calls. That ranges from an Emergency Position Indicating Radio Beacon, satellite phone or even a conventional cell phone.

VHF towers on Deception Hills, Mt. McArthur and Duffield are already down and awaiting parts from the contractor. A VHF tower on Sukkwan Island is also not broadcasting and bad weather has kept contractors from investigating the cause.

Those on the water are asked to monitor Channel 16 and relay any unanswered calls for assistance to the Coast Guard. Sector Juneau command center’s number is 907-463-2980. 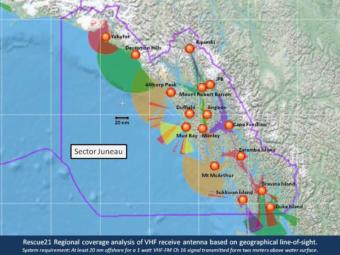 The U.S. Coast Guard reports intermittent VHF outages on the emergency Channel 16 but says the situation has improved in the past two years. 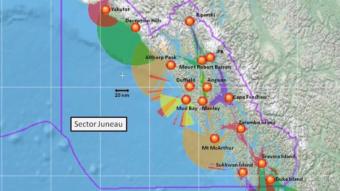 The Coast Guard is recommending other communications systems as a backup, like satellite phones or texting devices, emergency beacons or even cellphones where there’s service.

Poor VHF coverage isn’t a new issue. But this many outages at once is not normal.