Displaced Haines residents have begun using a temporary road to access properties on the other side of a landslide that destroyed four houses and killed two people last month. Residents are taking advantage of a four-day window to collect trucks, boats, snow machines and other belongings.

Last week, the Haines Borough authorized the construction of a temporary road across the Beach Road landslide on the condition that residents use it at their own risk.

Southeast Roadbuilders manager Roger Schnabel spent the weekend diverting water, installing culverts and stabilizing the path for the road. People began driving across it at noon on Monday.

Haines resident Diane La Course volunteered to direct traffic at the entrance to the slide area. Vehicles cross one at a time.

“Everybody is signed in and signed out and we keep track of if anybody is going to spend the night in there,” La Course said. “So the whole idea is that there’s a good stream of accountability to know who is in there at a given time.”

Beach Road residents developed a safety plan for using the temporary access road. It includes hillside monitors looking for movement, flaggers and an extraction crew in case any vehicle gets stuck while crossing. Drivers in transit must maintain communication by phone or radio with volunteers directing traffic. The road is open from 8am to 4pm each day.

Art Woodard’s home on Beach Road is at the other side of the landslide. He used the temporary road to collect his vehicles and other belongings.

“Right now we’re just trying to make our life outside easier so to speak. The vehicles are going to make a huge difference. Plus little things and paperwork that we need to get done,” Woodard said. All these different things that were always there for us, we’re now having to come back in and pick them up periodically.”

Not everyone supported clearing a temporary road across the landslide. The Haines Emergency Operations Center opposed construction based on advice from geologists who say there is still an imminent threat of another slide. Geologists have identified a crack in the bedrock on the hillside, and material came downhill last week during heavy rains before the temperature dropped below freezing.

Woodard said he doesn’t want to live in fear of risks that are uncertain.

“We live in a dynamic planet. We happen to live in this landslide zone. As far as I’m concerned for the fifteen years I’ve been living here, it could’ve happened at any time. The most dangerous time to be here was just before the landslide happened, and nobody knew it,” Woodard said.

Beach Road residents are operating on a tight schedule as they try to collect belongings.

At this point, the plan is to close the road down again on Friday, but it could close at any time if there is movement on the hillside or weather conditions change for the worse. Meanwhile, the Alaska Department of Transportation and the Haines Borough have commissioned an assessment of the geological hazards to help make decisions about the future of Beach Road. 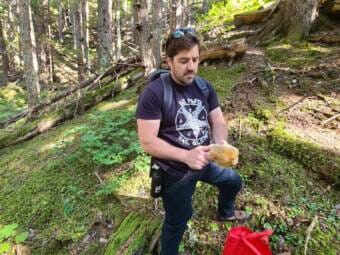 Team Rubicon is mostly veterans and first responders volunteering to do disaster recovery missions around the world.

A decade ago, Southeast lost a Senate and a House seat when the districts were redrawn due to population shifts.