Sealaska Corporation announced on Monday that it is getting out of the logging business after more than 40 years.

The move by one of the region’s economic powerhouses is the latest sign of Southeast Alaska’s economic transition away from logging.

“Logging created value for our Alaska Native shareholders for decades, and it brought us to where we are today. We’re grateful for the commitment and professionalism that led to our success,” Sealaska CEO Anthony Mallott said in a statement. “But we’ve now built an organization that can thrive well into the future, and that means engaging in activities with more enduring benefits for our communities.”

The news was welcomed by environmentalists opposed to logging old growth forests.

“We are overjoyed for Sealaska at this incredible decision making by Anthony Mallott and by their board chair Joe Nelson,” Meredith Trainor, executive director of the Southeast Alaska Conservation Council, told CoastAlaska on Monday. “And just this visionary leadership of moving Sealaska away from logging and towards other ways of creating benefit for their people.”

The Juneau-based Native corporation says the transition isn’t expected to affect future profits or dividends. A joint statement says the decision is part of a long-term plan to generate “sustainable value” for shareholders.

Until now, Sealaska was a major player in the region’s timber economy with more than 360,000 acres in its portfolio.

In 2015, it began logging lands it received through a transfer by Congress of more than 70,000 acres of Tongass National Forest, largely around Prince of Wales Island.

The Alaska Forest Association, the state’s timber industry group, declined to comment on the news.

Sealaska Corporation was created by the landmark Alaska Native Claims Settlement Act. It has about 22,000 shareholders, most of whom live in or have historic ties to Southeast Alaska. 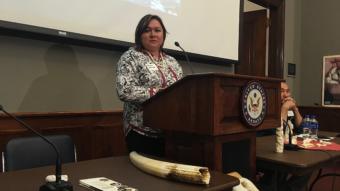 The board rewrites boundaries based on federal census results, so its decisions affect who controls each chamber for 10 years.

Effort to have term limits for Sealaska board fails, and other news from the 2020 annual meeting

In the race for Sealaska’s board of directors, three of the four seats up for election went to board-endorsed candidates running on a joint platform.

For Alaska Native shareholders, criticism on social media during board elections can trigger state fines

State regulators will fine some Alaska Native corporation shareholders over their criticism on social media. That’s because free speech is not protected when it comes to corporate elections.