The former mining town of Red Devil sits far upriver on the Kuskokwim River. It’s a tiny town with a lot of big issues to tackle, and no forms of government to do so. The remote town hasn’t had its sewage drained — ever.

The community had septic systems installed and plans were laid for a sewage lagoon, but it was never built.

“Because we have no sewage lagoon, we can’t pump it out. And this will be the 16th year that none of the 1,000 gallon tanks have been emptied,” said Theodore Gordon, one of the 21 to 26 residents of the town, depending on who’s counting.

Red Devil can’t get funding together to pump its tanks or to dig a lagoon because it doesn’t have any entities to act as recipients on the community’s behalf. It had a tribal council running intermittently since the 1970s, but the council stopped operating more than a decade ago. Most tribal members and their descendants left for bigger towns and more work, and now there are only three tribal members remaining in town. The tribal members scattered across the state are working to reestablish their council, but the elections have been bogged down by disagreements about the proper process and protocol.

Though minuscule, Red Devil is bigger than it was a century ago. There wasn’t even a village until a prospector struck mercury ore. He built a mine and the workers came. At its height, Red Devil’s population was in the triple digits. When the price of mercury collapsed, the mine closed up shop and the jobs melted into thin air.

Now the town only has four jobs.

“They have the post office. One job is for meeting the mail plane picking up the mail, and then the other two jobs is at the power plant,” said Gordon.

When the mine’s operators shut down, they left behind a dubious legacy. The region is mired with mercury in the water and land, and levels are too high for the Alaska Department of Environmental Conservation to be comfortable with. The federal Bureau of Land Management has plans for the mercury mine site cleanup, but Red Devil is also near the site of the proposed Donlin Gold Mine. Individual residents can comment on the permitting process, but they have no official entity to act on their behalf.

A local government entity like a city council could serve as elected representation for the whole community, rather than just the three tribal members. But to establish a second-class city, with a council that could run municipal systems, a community needs to have 25 residents and census estimates fall just shy of that. If Red Devil thinks that it has more people, it could challenge the census estimates.

Many similarly-sized towns in Alaska received tens of thousands of dollars in CARES Act funding last year. Some were represented by community associations, nonprofit entities that can take on many of the same responsibilities as city governments. There’s no minimum population required to form a community association, but Red Devil does not currently have one.

One community member, Theresa Morgan, said that she would simply like Red Devil to have more municipal amenities.

“We really would like, you know, the water and sewer, a store and clinic just to get Red Devil back on its feet,” Morgan said. 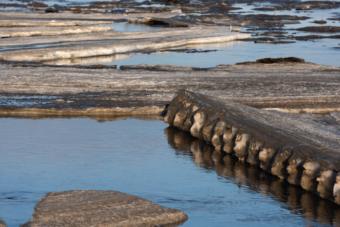 The Kuskokwim River has largely cleared itself of in-place ice, greatly reducing the chances of flooding along the river, according to the National Weather Service. 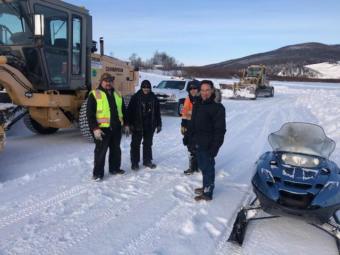 A record set in ice: The Kuskokwim River's 355-mile ice road is its longest ever

The ice road on the frozen Kuskokwim River is longer than most traditional highways in Alaska. It allows for snowmachine and vehicle traffic in a region that otherwise relies on unpredictable airplane travel in the winter. 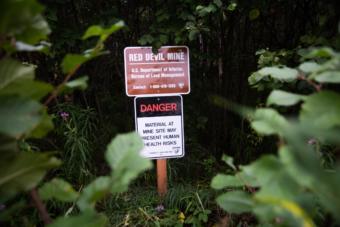 The Red Devil mercury mine permanently closed in 1971 after the price of ore fell and the owners walked away, leaving it up to the state and federal governments to clean up the site.