It was a blustery fall day at Tom Madsen Airport. A PenAir flight from Anchorage was making its second attempt to land in Unalaska. Gusting tail winds made the landing extra challenging. As the plane touched down it failed to slow down, broke through the airport’s chain-link fence, crossed a road and hit a rocky embankment just short of the frigid waters of Iliuliuk Bay.

Steve Ranney was among the 39 passengers on flight 3296.  He’s a commercial pilot with 20 years of experience and still trying to understand what went wrong that day.

“I just don’t think that we can flat accept that there’s going to be accidents like this,” Ranney said. “I think that’s really one of the more important things. I know people make mistakes, but in the air carrier world, these things should not happen. This shouldn’t have happened at all.”

Ranney is still recovering from his injuries. A passenger to his left fared much worse; 38-year-old David Oltman was fatally injured in the crash. There were at least nine people hurt. Oltman’s death on Oct. 17, 2019 was the second fatality for a commercial airline in the U.S. in the last decade.

Ranney was traveling with his son who was competing with the Cordova school swim team. He is grateful the students escaped serious injuries.

“I’ll take the hit for the boys,” Ranney said.

On Wednesday, the National Transportation Safety Board released more than 2,000 pages of documents related to the crash. Ranney has already begun to comb through the files.

“A lot of people really get frustrated with how long it takes,” Ranney said. “But I’m actually kind of surprised at how much information they’ve gotten and how close it is to wrapping up.”

Here’s what the federal investigators initially found: A faulty wiring job may have kept an anti-skid device from working properly. And that could have contributed to the plane overshooting the tarmac.

But they also heard from PenAir pilots concerned that the airline was reducing the amount of experience its pilots needed to land on Unalaska’s notoriously challenging runway.

PenAir historically required pilots to have a minimum of 300 hours in a Saab 2000 before they could captain a flight to Unalaska. But after the Seybert family sold the airline to RavnAir Group in 2018, that rule was being reviewed.

In fact, NTSB investigators were told by PenAir pilots that in early summer 2019 a conversation was held where the chief pilot and Ravn vice president of flight operations discussed relaxing that rule.

The captain of flight 3296 had been flying into Unalaska for about three months. On the day of the crash, he had logged 131 hours in a Saab 2000 — less than half the historical requirement for PenAir pilots responsible for bringing flights into the Aleutian city. His first officer had a few hours more. Both had been hired by the company in May of that year.

The NTSB’s investigation describes the airline’s safety culture following PenAir’s sale to RavnAir Group. Ravn’s safety director told investigators he considered the overall safety culture as “still good,” but admitted that pilots had approached him saying they were “not as comfortable anymore” speaking freely about their concerns.

A Ravn VP of flight operations told investigators the requirement was not consistent with how other commercial air carriers operated in the Lower 48.

“I’m not convinced that it’s necessary because it’s not done elsewhere,” the VP said. “There are mountains around the country, around the world. Air is air. Physics are physics. Why is this different?”

So what happens now? Now that fact-finding is mostly complete, NTSB’s Clint Johnson in Anchorage said investigators hope to wrap up their work within the next year.

“The analysis portion is crunching all the information that we have here and ultimately driving towards a probable cause and analysis,” Johnson said. “Also most importantly, probably recommendations will come out of this accident investigation to keep it from happening again.”

The five presidentially appointed members of the National Transportation Safety Board may vote to hold a public meeting to review this investigation and determine a probable cause for the accident. Most accidents don’t have board meetings. The last time this happened for an Alaska investigation was for a fatal Togiak crash from 2016 operated by another RavnAir Group subsidiary, Hageland Aviation.

Johnson said board meetings are similar to a court hearing.

PenAir is no longer flying. Its parent airline RavnAir Group declared bankruptcy in April and sold its assets this summer. A Southern California commuter airline bought some of its planes and two of the operating certificates. The company resurrected the name Ravn Alaska and rehired some of its crew. In November, it resumed scheduled flights to Unalaska, under new ownership but with the same old name.

KUCB in Unalaska and ProPublica are investigating aviation safety across Alaska. They are interested in hearing about people’s experiences flying or working for airlines in the 49th state and would particularly like to hear from people who have been in plane accidents or lost loved ones in fatal plane crashes.

If you have something to share, contact KUCB reporter Zoe Sobel via email or via phone call or text at 907-359-1888. 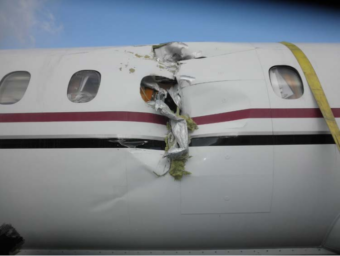 The NTSB update is a detailed, seven-page statement of facts about the flight and the investigation, with sections on the runway, the flight recorders, the plane and its engines. It does not assign a cause to the crash. That's expected later.