When an ominous mushroom cloud of ash erupted from Mount Redoubt 31 years ago on Dec. 14, 1989, it was anyone’s guess how long the eruption would last.

“The rule of thumb for looking at volcanoes like Redoubt is you typically look at how it’s erupted in the past and that often gives you good guidelines in the future,” said John Power, a research geophysicist at the Alaska Volcano Observatory.

Today, AVO uses an assemblage of sensors, receivers and satellites to monitor dozens of Alaska volcanoes, including Redoubt.

But in 1989, AVO was just one year old. When Redoubt’s first ashy belches began on Dec. 14, AVO had been watching Redoubt for about three months.

Power remembered catching wind of a set of foreboding, low-frequency volcanic earthquakes under Redoubt 23 hours before the eruption. That was AVO’s first hint of the six-month eruption that followed, sending layers of snow-like ash across Southcentral Alaska, grounding flights and temporarily halting a Cook Inlet oil operation.

One of the most dramatic effects of the eruption was when a cloud of ash cut off all four engines of a Boeing passenger airplane traveling from Amsterdam to Tokyo with 250 passengers. It dropped over two miles before the crew could restart the engines and land in Anchorage.

Henry Knackstedt, of Kenai, wasn’t in the air that day. But he did avoid flying his private plane for a while after that to avoid the disruptive effects of ash on his own engine.

“When it came here, we had a fair bit of snow on the ground,” he said. “And then we ended up with three-eighths of an inch, half-inch of ash, depending perhaps where you were. It looked like what I would imagine the moon to look like.”

Come April, the snow melted faster because of the ash buried beneath it. Occasionally, there were muddy rains that had a corrosive effect on car paint.

“We were concerned about it because, periodically, you’d see plumes arise from the cone and you’d think, ‘Well, is this going to be a big one?’ And that went on for several months after the main eruption,” said John Williams, who was mayor of Kenai at the time.

Williams said he was preoccupied by concurrent efforts to clean up after the Exxon Valdez oil spill, which had happened several months prior. No shutdown orders or emergency proclamations in Kenai were necessary after the eruption.

No one had a better view of Redoubt than Mindee Morning. She looks at the volcano across the inlet from her home on the bluff along Kalifornsky Beach Road and remembered seeing beautiful pink shocks of light as the sun rose.

Her husband is an electrician and ran to the KSRM station to help when the power went out. But Morning wasn’t too worried.

“We were so casual about it,” she said. “My son and I just, because the lights went out, we just went back to bed.”

Spectators were awestruck by the eruption’s beauty. But the fallout over the next few months was more serious.

Eruptions prompted flight cancellations and delays at airports in Anchorage and Kenai. Experts worried ash would interfere with engines, as it had with the passenger jet, or cause damage to wings and windshields.

The ash was also bad for air quality, as Morning remembered.

“At that time I was a very active runner, running two times a day,” she said. “That came to a screeching halt. I was running in my basement.”

Mudflows reached the Drift River Oil Terminal, a tank farm for crude oil across Cook Inlet from Kenai, at the base of Redoubt. Williams, president of the Cook Inlet Regional Citizens Advisory Council, said he advocated closing that facility completely after the explosion, for fear mudslides could take down tanks full of oil.

All the while AVO, which had been created in response to earlier eruptions, was coming into its new role.

But Power thinks the 1989 eruption brought home for many people how scary eruptions could be, in part because it nearly took down a passenger jet.

“I think, prior to that, the really invasive incidences of problems between jet aircraft and volcanic ash had occurred in Indonesia and very distanced areas,” he said. “And it hadn’t really been brought home that, ‘OK, this is an issue here for us, as well.’”

In response, AVO expanded. That included the creation of a worldwide network of volcanic ash advisory centers, which provide information on where and how ash travels after eruptions through weather services and aviation agencies. It also ramped up an effort to monitor eruptions along the Aleutian chain.

Technology has helped the observatory up its game. In 1989, it relayed information by fax machine and floppy disk. Now, notifications come in via cellphone. People who are interested in learning more about the observatory’s work can follow along on its Facebook page.

“I think we’re much better positioned at this point to anticipate eruptions with volcanos like Redoubt any many more throughout the state,” Power said.

Power said there’s currently nothing unusual happening at Redoubt. But in case of an eruption, he recommends a set of precautions that is very familiar in the age of COVID-19: avoid travel and stay inside, especially if you have respiratory problems. 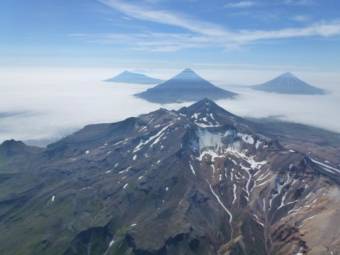 A string of volcanoes in the Aleutian Islands might actually be one mega volcano, scientists say

Multiple pieces of evidence led scientists to the conclusion that there might be a 12-mile-wide caldera — a large volcanic crater — or a number of calderas, hidden underwater beneath the group of islands. 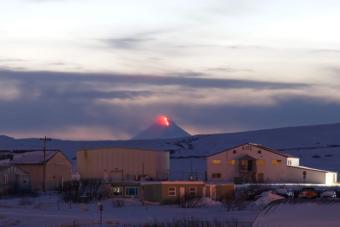 Ash eruption at Shishaldin Volcano in the Aleutian Islands has intensified, sending an ash cloud 27,000 feet in the air. 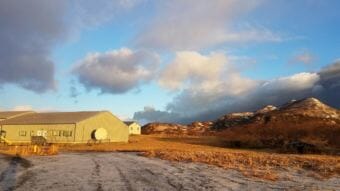 After a huge eruption of ash, Mount Veniaminof quiets down

Mount Veniaminof has stopped spewing ash for now. Located on the Alaska Peninsula north of Perryville, the volcano emitted a large ash cloud last week that narrowly missed the village.