The recount in the pivotal House District 1 race has ended. The new count favors Bart LeBon by one vote, and with it, Republican control of the Alaska House of Representatives.

The recount began Friday morning in Juneau and lasted more than five hours. In the end, LeBon led his opponent, Democrat Kathryn Dodge, by a count of 2,663 votes to 2,662.

The candidates were tied with 2,661 votes each as of Monday’s certified count.

State Division of Elections Director Josie Bahnke announced before the recount they would not count a ballot cast in the Fairbanks number six precinct, marked for Kathryn Dodge. She reiterated the point during a press conference Friday afternoon.

“We discovered that it was in fact a spoiled ballot and was not counted. So, (we) wanted to kind of close the loop on that.”

LeBon picked up a vote from a ballot that was previously counted as partially voted due to the voter’s registration status. The ballot was later fully counted when the division verified the voter’s address.

Another LeBon vote came from a questioned ballot belonging to a registered voter with a felony conviction. Region III Elections Supervisor Jeremy Johnson explained that vote was initially not counted due to the individual’s voter status.

“Then today, upon further research, we were able to determine that they had been off of probation since 2017, and they had an appropriately-filed registration application. So that’s why that ballot would be counted.”

Dodge picked up a vote from a ballot that was marginally marked, meaning it was marked too faintly for the ballot machine to register.

Both campaigns challenged several ballots during the course of the recount. They now have five days to submit a legal challenge. If they do, the appeal will go directly to the Alaska Supreme Court.

After inching ahead, LeBon said he looks forward to a resolution.

“I thought after the election, it would settle out, the dust would settle out fairly quickly, and then I never dreamed three weeks later we’d all be here together in Juneau still hammering it out. So I learned a lot.”

Dodge said she and her lawyer planned to regroup and figure out next steps.

Editor’s note: The original story, with a timeline of updates during Friday’s recount, is below.

Republican Bart LeBon now has a lead of one-vote in the House District 1 recount.

This vote came from a ballot that was previously rejected but then determined to be valid. Had to do with a voter with a felony conviction who turned out to be off probation. #akelect https://t.co/lqqiePSWxM

The hand count confirmed the electronic count in that district. #akekect

The latest totals from the recount underway now have Republican Bart LeBon and Democrat Kathryn Dodge tied again, but with one more vote each compared to the count certified on Monday.

A hand recount of Fairbanks Precinct Number 4 is still to come.

The House District 1 election recount is underway at the Alaska Division of Elections Office in Juneau.

With all of the regular precincts recounted, Democrat Kathryn Dodge appears to have eked out a one-vote lead over Republican Bart LeBon.

Fairbanks No 7 precinct now in. No change. #akelect

That still leaves absentee ballots and questioned ballots to be recounted. Election officials had certified a tie in the race on Monday.

The vote that Dodge picked up is unrelated to the uncounted ballot discovered after election night. Elections Director Josie Bahnke says that ballot was spoiled and should have been destroyed — it will not be part of the recount. 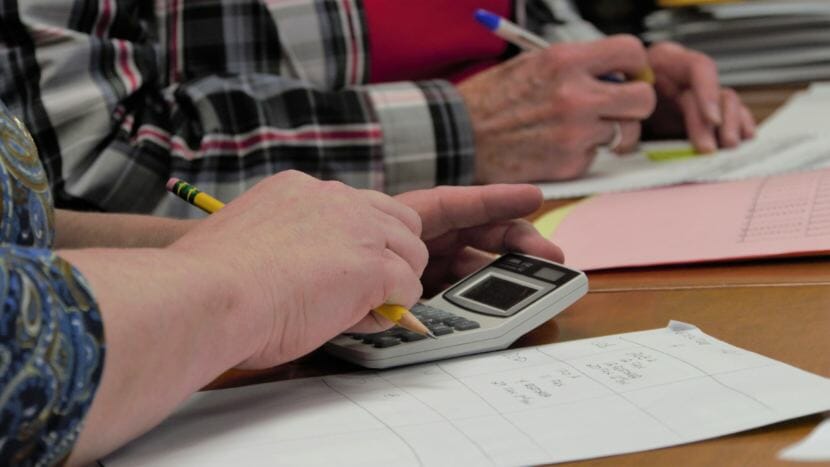 State Review Board members Lynda Thater-Flemmer and Stuart Sliter tally up ballots cast in the House District 1 election at the Juneau office of the Alaska Division of Elections on Nov. 23, 2018. (Photo by Jeremy Hsieh/KTOO)A recount is set to begin at 10 a.m. today in the tied election between two aspiring Fairbanks lawmakers. At stake is who controls the Alaska House of Representatives, which could alter the course of state government for the next two years.

The candidates in the House District 1 race are Republican Bart LeBon and Democrat Kathryn Dodge. The Anchorage Daily News reports both have hired lawyers.

In a letter to the Division of Elections dated Thursday, Dodge’s lawyer argues there are two ballots that weren’t part of Monday’s certified count that should be part of today’s recount. One went uncounted on election night and was discovered later. Its inclusion would help explain a discrepancy in the number of ballots issued and the number counted at that polling site. It’s marked for Dodge.

The other ballot Dodge’s lawyer flagged had been invalidated because ovals for both Dodge and LeBon were filled in. Lebon’s oval also had an X over it. State law says an X mark in an oval counts, and when too many ovals are marked, those votes don’t count. Dodge’s lawyer argues this particular X indicates a crossing out of the LeBon vote, and points to the absence of X marks elsewhere on the ballot demonstrating the voter’s intent for Dodge.

After the recount, state law lays out the process for appeal. In this case, an appeal must be filed within five days and would go directly to the Alaska Supreme Court.

“The inquiry in the appeal shall extend to the questions whether or not the director has properly determined what ballots, parts of ballots, or marks for candidates on ballots are valid, and to which candidate or division on the question or proposition the vote should be attributed. The court shall enter judgment either setting aside, modifying, or affirming the action of the director on recount.”

As for the recount itself, come back to this post for updates.