The federal government is taking on the transboundary mining issue.

In November, the State Department issued a statement saying it was aware of Alaskans’ environmental concerns. And it said it was raising the issue with its Canadian counterparts.

But details were scarce.

Then, the department sent a letter to Lt. Gov. Byron Mallott, who released it Dec. 28. He’s headed up the administration’s efforts to address potential pollution from mineral prospects across the border in British Columbia.

“We’re very excited to see the federal government engaged in this issue and their response that they’ve made to us and to see the actions going forward,” said Barbara Blake, the Walker-Mallott administration’s senior transboundary mines adviser.

She said one important promise is to research what the two governments can do to protect Southeast Alaska watersheds.

“They’re looking at the gaps and limitations of cooperation between our two countries right now,” Blake said. “And so we’re anxious to see what comes about from their analysis or their review of any gaps or limitations as they currently stand.”

The State Department will release its findings at an April meeting of the International Joint Commission, the panel that addresses transboundary water concerns.

The department earlier said it would not get involved with the issue.

The federal agency’s letter came in response to a November request from the Walker-Mallott administration and Alaska’s congressional delegation to address transboundary mining.

Mine critics have repeatedly called for commission involvement.

One is Frederick Olsen Jr., who chairs the SouthEast Alaska Indigenous Transboundary Commission. He’s also tribal president of the Organized Village of Kasaan, on Prince of Wales Island.

“It looks like it’s a good first step,” Olsen said. “Of course, as it said in the letter, to have the International Joint Commission, you still have to have the Canadians support that.”

Heather Hardcastle of Salmon Beyond Borders agrees. She’s encouraged, but said there’s a lot more work to be done.

“I think first and foremost we’re looking at some sort of financial-assurances mechanism to be set up so that those of us downstream of these mega-mines know that appropriate bonding has been required of these mining companies,” she said.

Two mines are operating in transboundary watersheds that flow into Alaska, the Brucejack and the Red Chris. Another, the Tulsequah Chief, is closed and leaking polluted water.

Several others are in the exploration phase.

Developers and owners have said their operations are or will be safe and won’t damage the environment.

She said officials also need to press for better technology, including changes in the way waste rock from ore-processing is stored.

Mines commonly put them underwater behind earthen dams. Hardcastle said that will lead to spills of polluted water that will harm fish and people downstream.

That’s what happened in 2014, when an eastern British Columbia storage dam broke.

“Not to be rude, but it’s just a letter. That little piece of paper, if you printed it out, would not stop a lake of poison debacle like Mount Polley or something like that,” Olsen said.

The State Department’s letter mentions tribal concerns. But it doesn’t say anything about tribal involvement.

Rob Sanderson Jr. is first vice president of the Central Council of Tlingit and Haida Indian Tribes of Alaska.

“At the end of the day we are government. The tribes are government,” he said. “So we need to be able to use that leverage moving forward. Not just the state, but the tribes too.”

But she said the administration is not turning the whole issue over to the federal government.

“We’re going to continue be engaged with them as necessary and wherever possible. The lieutenant governor would like the state to remain involved in this process,” she said.

She said Mallott will travel to Washington, D.C., for a federal interdepartmental work group led by the Environmental Protection Agency. He’ll also meet with Canadian officials in Ottawa.

His office also will continue following up on a cooperative agreement Alaska and British Columbia signed last year. 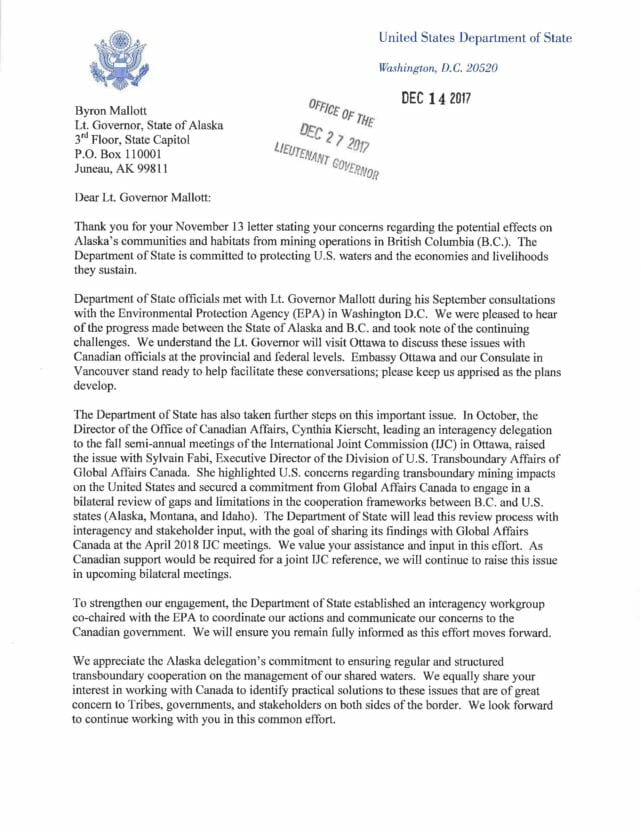