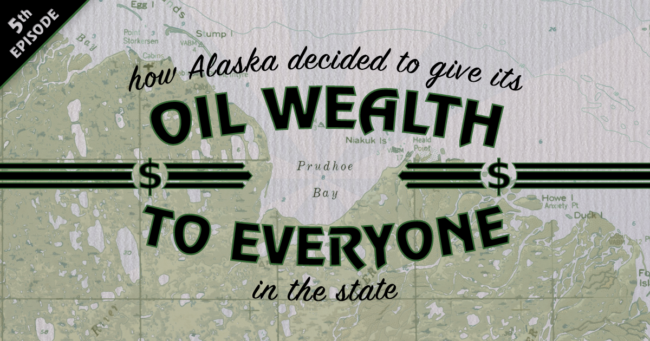 In Alaska, we don’t pay income tax. We don’t pay state sales tax. But once a year every man, woman and child gets a cut of the state’s oil wealth. There are plenty of other oil states in the world, but Alaska is the only one that treats residents like shareholders and sends them dividend checks every year.

The idea of saving our oil money did not come naturally at first. After finding the biggest oil field in the United States in the late 1960s, the state auctioned off oil leases all along the North Slope.

They thought they would get a couple million dollars from the auction — maybe 10 — but those lease sales made $900 million — nine times the state’s entire budget for that year. Alaska’s lawmakers had a choice: save it or spend it. What did they do?

“Well, I don’t have anything but a crude way to say…they went and pissed it up against the wall,” said Clem Tillion, who was a state legislator at the time.

He wanted to lock up the 900 million dollars and throw away the key.

But the state was only 10 years old at the time…with an economy based on fish. The legislature wanted to spend the money on infrastructure. And they did. They spent it on all sorts of “fancy projects,” said Tillion.

“…like grain storage and dreams and roads that pushed on into nowhere. We built auditoriums, built schools that were less interested in education and just fancy. In other words, we took the $900 million and blew it.”

Not everyone agrees that we blew that money. That was the cash we used to make Alaska a real state with a real economy and real infrastructure. The bulk of it went to education.

But it makes sense that Tillion thinks the money was wasted.

He’s 92 years old now and lives in Halibut Cove, Alaska — a community he founded — in a house he built himself.

Talking to him, it’s obvious that he feels strongly about preserving things for future generations. He even has a reminder of his own mortality.

“I keep a coffin just outside the door,” he said. “It’s a steel one. Made in China I think. I have a place to put it. The grave is all dug. There’s a hatch. I should stencil on it ‘Reserved: Clem Tillion’.”

This is not just the philosophy of a man staring death in the face. This is more or less the philosophy that drove him to fight for Alaska’s Permanent Fund.

In 1976 the legislature passed a bill that would require the state to save 25% of all its oil money. And that November the people of Alaska voted it into the constitution. Tillion got his Permanent Fund.

The fund was earning interest, but lawmakers couldn’t figure out what to do with that interest. Governor Jay Hammond had an idea: take that money, divvy it up and give it to the people of Alaska.

“I want to make sure that everybody at the conclusion of this activity can say ‘hey, I got a piece of the action’,” he said in a 1977 public TV program.

He called his plan Alaska, Inc., a corporation of sorts with every Alaskan as a shareholder.

Hammond wanted the oil money equally distributed across the state — to rural and to urban areas, to rich and to poor. He was worried if the government was responsible for deciding where to spend that money, it would go to pet projects, to well-connected politicians. That it would stay in Juneau and Anchorage.

It took a few years for the PFD to wind its way through the legislature. There was some debate, some political push back, even a lawsuit that went to the Supreme Court. But the story ends like this: in 1982 dividend checks for $1,000 were dropped in the mail to every Alaska resident.

“When you collect that check it is your share as an owner of the resource,” said Tillion. “With the Permanent Fund, we converted a non renewable resource into a renewable. And you get a piece of that every year.”

The account that the PDFs are drawn from is managed by the Alaska Permanent Fund Corporation. The headquarters are in Juneau. In a big blocky tan building.  Angela Rodell is the CEO.

It’s not like there’s a giant vault here with those billions squirreled away.

But there are a ton of computer screens.

Alaska’s billions are in a diverse portfolio: We own whole city block in Manhattan, shopping centers in Spain, industrial parks in Minneapolis. We have stocks in 7-11 stores in Malaysia and Churchill Downs — the home of the Kentucky Derby.

And the fund is doing really well.

“We’re having a very good year so far,” said Rodell. “We are up 7 billion dollars over where we started the fiscal year.”

One thing that’s missing from that successful fund, though: oil money.

Last year the state only put away $300 million of actual oil money. The fund earns twice that in interest…every month.

The Permanent Fund is supposed to be just that: permanent. But, oil prices and production are down. And it’s becoming very clear that we just can’t rely on oil money anymore to fund our government.

Constitutionally, the state can’t touch the principle of the Fund, but the legislature can change what happens to the interest. And they have. For two years in a row now, the dividend has been capped — meaning Alaskans are getting half of their PFD check. The state is taking the rest and saving it…with the hopes of figuring out a way to use it to pay for government eventually.

This is Clem Tillion’s nightmare.

“To take something from the Permanent Fund that belongs to the people,” he said in Juneau this summer. “You’re taking money away from some widow in Emmonak.”

He was in town fighting for the PFD like it’s 1976. He’s currently suing Governor Walker for capping the PFD last year.

If oil money isn’t paying the bills, then we need find another source of income. Like taxes. This is a song Tillion has been singing for a long time. When Alaska got rid of its income tax in 1980, he was the only one who voted to keep it.

But if we don’t figure out how to solve our budget woes any other way, we will have no choice but to start spending our savings. As Angela Rodell at the Permanent Fund Corporation is well aware.

“If you were in a tight spot and there was nothing left, I don’t know how you would not spend that money if that was the only thing you had left to tap,” she said. “So, it absolutely could go away.”

Back when Alaska’s oil was discovered, Clem Tillion knew it wouldn’t last forever. Everyone kind of knew it, but it took a special kind of foresight to start planning for the end of oil during the excitement of the bonanza. How does he feel about his legacy?