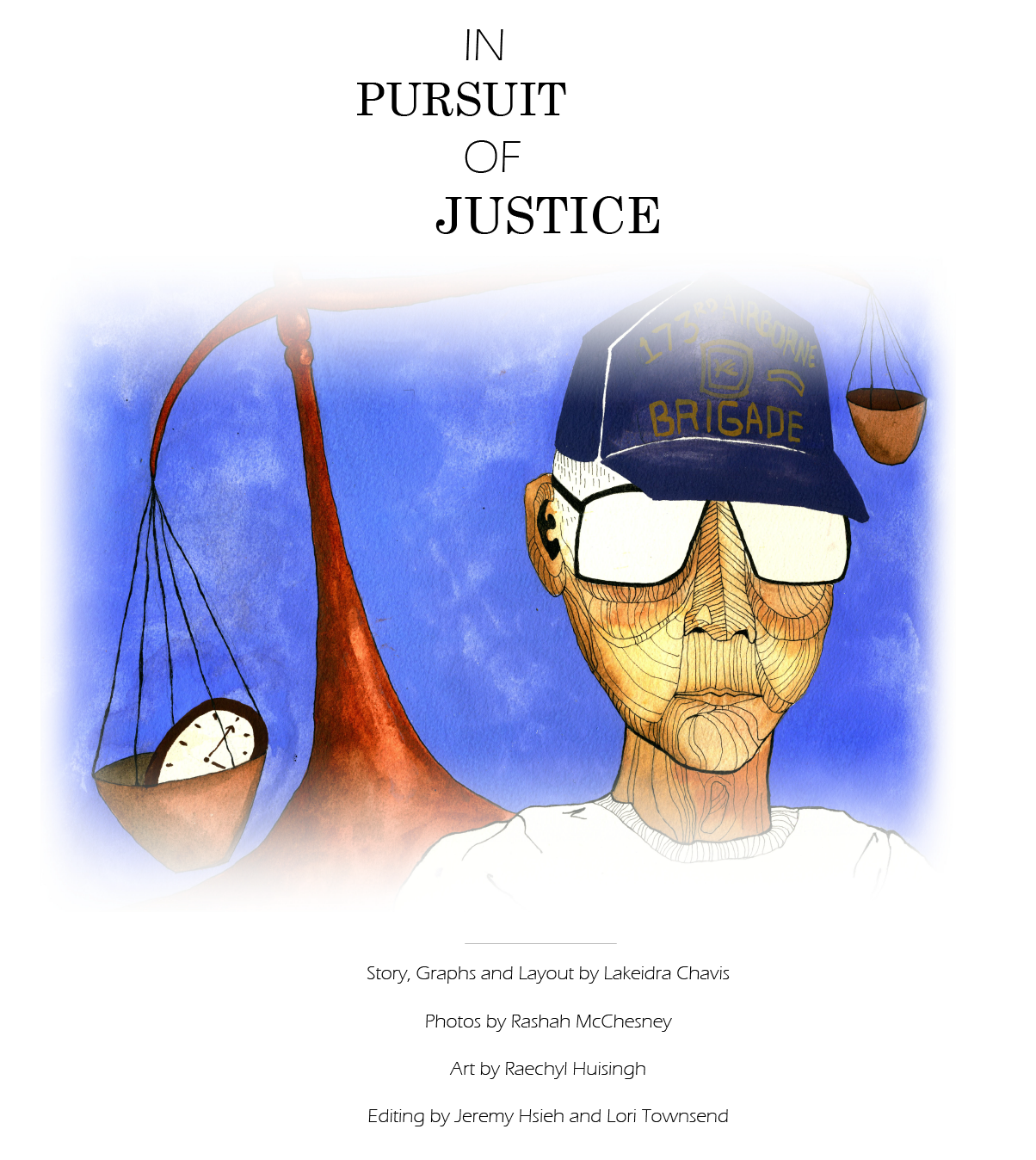 On average, an investigation into a discrimination case in Alaska may take a year or two, according to the agencies that handle them.

But for one Chugiak man it has taken more than a decade.

On a recent afternoon in September, just off a wooded road in Chugiak, John Suter, 67, is outside his home with his grandson, who’s running around. Suter’s wearing an Army airborne veteran’s hat and a light blue shirt that says “The NSA, the only part of government that actually listens.”

Dozens of retired sled dogs are on the property. Suter became famous in the late ’80s for racing poodles in the Iditarod. The novelty landed him on “The Tonight Show with Johnny Carson.”

But this story is about what happened after that moment, when he started working for the Anchorage International Airport in the late ’80s.

When he started, he says he was like a celebrity. He was promoted quickly in the field maintenance department as a laborer.

“Then after I started meeting some of the black people there, some of the other minorities, Natives and others … I started seeing that they were there many years longer than I was and I started bypassing them” for promotions, he said. “And so it started raising a red flag. What’s going on here? And finally, things got worse …”

Suter, who is white, says that some of his managers would call black Americans working at the airport the n-word.

In one incident, he says a manager shot a noisemaking pistol used to haze birds at one of the black men he worked with.

Suter says at the time, there were lots of things going on at the airport, including a sexual harassment case against a manager, which was later dismissed. He says some of his bosses were openly discriminatory against minorities.

But Suter wasn’t content with watching these issues play out from the sidelines. He was outraged. Over the years, he went on multiple self-funded, self-operated, letter-writing campaigns.

“Well, I’d be buying boxes on 500 envelopes and rolls of hundreds and hundreds of stamps,” he says laughing.

Suter said he was reassigned to other departments and suspended because of his activism. He thought it was retaliation. In 1997, he filed a discrimination case against the airport.

Three years later, he was fired.

According to his termination letter, he was fired after multiple disciplinary actions for making false and misleading statements. Suter says he has yet to learn what those false statements were.

Documents from interviews with management say Suter routinely got distracted from his job duties.

In 2002, five years after he filed his complaint, the human rights commission finished Suter’s case. Case documents said his complaint “was not supported by substantial evidence.”

But for Suter, that wasn’t enough.

“We went to the Ombudsman because our complaint was that the human rights commission wasn’t providing due process for anyone who goes there and files a human rights complaint that works for the state,” he said.

At his home in Anchorage’s Mountain View neighborhood in late September, Teddy Burns thumbs through papers in stacks of binders. Burns is the man Suter said he saw a manager shoot a bird-hazing gun at while he was sitting in a vehicle. The men think the incident happened because Burns is black.

Burns also filed a case with the human rights commission, and was unhappy with the result. They appealed their cases with the Alaska Ombudsman’s office, a state agency that investigates citizen complaints against government agencies and officials.

The binders and papers are all related to his case with the state.

“Doesn’t make sense, right? I thought about shredding it up, too,” Burns says, “getting rid of everything, just never happened.”

Burns recalls why he filed a racial discrimination complaint against the airport.

“I was scared and it bothered me for, probably years,” he says, “it was like, I guess being like in a war, shell shocked or something.”

But Burns kept working at the airport. He still works there today as a senior equipment operator.

“Well, it was a good job for one thing,” he said. “State jobs are hard to come by, you know? With good benefits and stuff.” 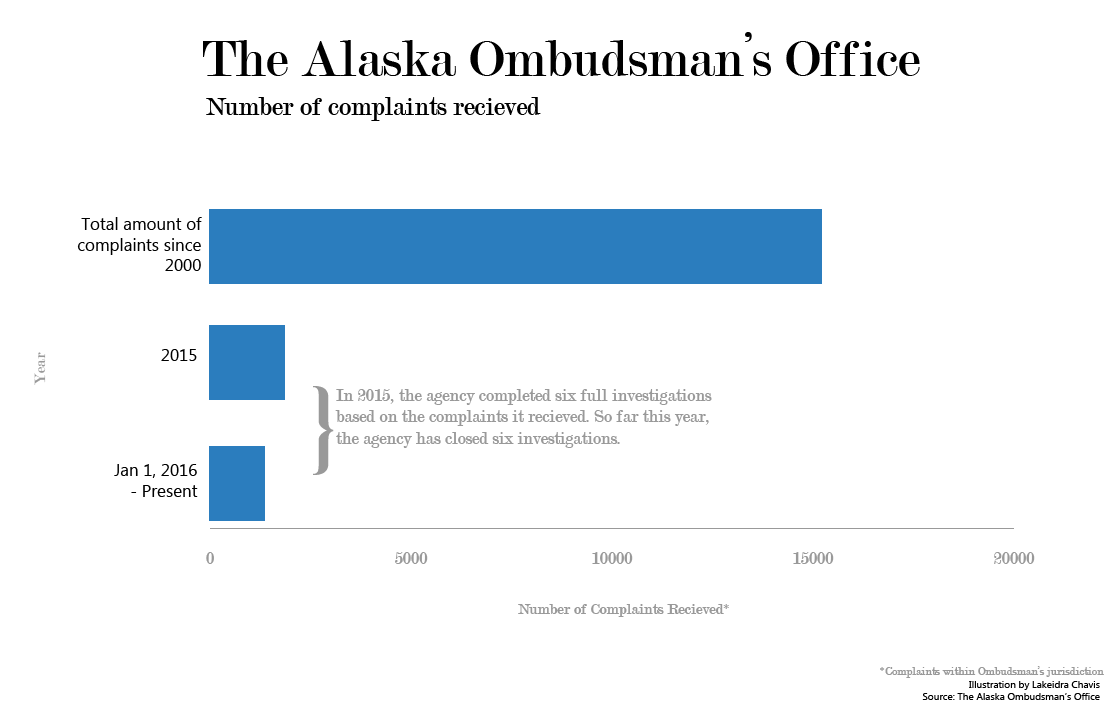 In 2011, after seven years, the Ombudsman’s office resolved Burns’ case.

“(We) tried a lot of steps and stuff, and it’s like spinning your wheels on ice, and snow and the mud,” Burns said. “You think you’re getting a little bit of traction and all of sudden you’re slipping backwards.”

The human rights commission did indeed take too long to investigate his complaint, according to the final Ombudsman’s report summary. (The report itself is confidential.) But the shooting incident couldn’t be investigated because it exceeded the commission’s statute of limitations for complaints.

The investigator sided with the human rights commission’s findings that there wasn’t discrimination.

But John Suter’s case, which has been at the ombudsman’s office since 2004, is still underway.

Then, like now, Linda Lord-Jenkins was the ombudsman. She’s well aware of Suter’s case.

“Typically they do not take that long, and yes, the work often depends on other factors,” Lord-Jenkins said. “The other factors include case load, incoming cases, they include staffing, they include the complexity of individual investigations.”

Lord-Jenkins wouldn’t discuss Suter’s case specifically, since it’s still open. But she says in the mid-2000s — around the time when Suter and Burns filed their cases — the office had a small staff and an extreme increase in its caseload.

She says the agency handles roughly 2,000 complaints a year. For very complex cases, the agency will open a full investigation into the complaint. Lord-Jenkins says the investigations can take several years to complete.

The agency has finished six full investigations so far this year. Lord-Jenkins says that while her office does hand down formal recommendations to the agency, it is not in charge of enforcement. But they do report to the legislature.

“I guess the only thing I want people to know is that when they come to us, they do get a thorough review of their complaints, and sometimes that takes a very long time,” she said.

But 12 years? After a long pause, she answered.

“I think if you do a quick investigation and you don’t look at all the pertinent factors, it’s not worth anything,” Lord-Jenkins said. “I would err on the side of thoroughness than untimeliness.”

“After I ended up getting my letter of no finding and stuff, I just gave up in a sense, ya know? John is good. John doesn’t forget anything,” he said, letting out a loud laugh.

In the past two years alone, Suter has emailed more than 50 legislators and staffers, reaching out to anyone who might offer assistance.

Most of the lawmakers say they won’t help him because he’s not a constituent.

“I don’t know, I guess I’m perplexed — how come I can’t get somebody on board and say, ‘Ya know, we ought to do something. We ought to go ahead and fix this,’” he said.

Suter says he wants accountability — an audit on the human rights commission and ombudsman’s office. Both agencies were audited in 2011.

Linda Lord-Jenkins from the ombudsman’s office wouldn’t say when she’d finish Suter’s case. But she emailed Suter and 13 lawmakers saying the preliminary report had been forwarded to the human rights commission. The commission just needed to respond.

Sen. Berta Gardner was one of the people copied in that email. She says she couldn’t help Suter because he isn’t one of her constituents, but her office emailed the ombudsman about his case.

She was surprised and upset to hear Suter’s appeal is still ongoing.

“What can happen this year that couldn’t have happened last year or a decade ago?” she asked.

She says she doesn’t remember the specifics of Suter’s case, but the point is the amount of time that’s gone by.

“Memories and data and all that stuff get harder and harder to access when it goes on this long,” Gardner said. “I think it’s appalling and unjust, whether he’s right or wrong, it’s unjust that this process should be — what is it now, 12 years?”

So Suter, at least for now, is still waiting for an answer.