After two summers of little to no business, Juneau’s tourist shops, tour operators and other local businesses are eager for visitors. A crowd gathered on Monday afternoon to greet the Norwegian Bliss — the first large cruise ship to dock in Alaska in 2022.

It was a typical Juneau spring day — rainy and chilly — as throngs of passengers disembarked and made for nearby tourism shuttles.

Laura McDonnell was among those gathered at the dock to meet them. She owns Caribou Crossings, a shop that’s been in Juneau for 25 years. It’s staffed by locals and sells art from 60 Alaskan artists.

“If it’s 10 people we’re excited. If it’s 3,000 people we’re super excited,” McDonnell said. “Just to see happy people on the streets again and visitors getting to come enjoy my hometown is the best.”

The larger number was closer. The Bliss had around 2,000 passengers on board or 50% of the ship’s capacity.

Juneau’s Mayor Beth Weldon was there, too, greeting passengers as they got off the ship. She says the first ship of the season is symbolic.

“It means ‘welcome back, Juneau!’ It means our economy should be springing up from here. And we’re pretty excited about that,” she said.

Acting City Manager Robert Barr said he has faith in the COVID-19 port agreements Juneau made with cruise lines, like the requirement that 95% of passengers would be vaccinated.

“Those were successful last season,” he said, noting that last year’s season was an abbreviated one — only 10% of the usual number of cruise ship visitors came to Juneau.

“So we’re often cautiously optimistic, I think is how I would put it, that we’ll see similar sorts of success this season. But undoubtedly, there will be work to do,” he said.

By dinnertime, the Red Dog Saloon — an iconic bar for locals and tourists alike — had been transformed for the season. The floor was covered with sawdust, and the servers were wearing gold-rush era costumes. The women were in red satin dresses, and the men had those garters on their sleeves.

“Yes, we have what we call our summer outfit on,” said Eric Forst, one of the bar’s owners.

He’s also cautiously optimistic about what the first day might mean for the rest of the summer.

“It’s day one. That’s only one cruise line. Each cruise line is going to handle things differently. So I’ll feel a little more comfortable after a couple of weeks,” Forst said.

But he’s still hoping locals will come in and keep business going, on those rare summer nights when there’s no cruise ship in port. 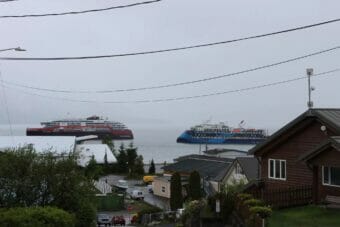