Melehoko Pauu Ma’ake has been dealing with two big problems since the volcanic eruption in Tonga. The first is reaching her uncle. He’s 84 and lives by himself near the capital, directly in the path of the tsunami.

She laid out the second problem in a Zoom call with some family members a few days after the eruption, as the group considered the best place to send aid money.

“The thing about Tonga is trying — is finding a very trustworthy source,” Ma’ake said. “You know, all of us here here, we’ve been to Tonga many times. And we know that when funds go to Tonga, sometimes it really doesn’t go directly to the people.”

She trusts the Red Cross and the Church of Jesus Christ of Latter-day Saints, but she’s still grappling with the problem of how best to fundraise in Juneau for her friends and family in Tonga.

So she called a group of her extended family to her home in Juneau to talk about what they know, to maybe figure out how they can help.

Ma’ake was born in Tonga but moved to the U.S. when she was four. Like many Alaskans, she and her husband moved to the state after a visit. She said she decided on Juneau because it’s a good place to raise a family — and they did. Now, when the family gets together, it’s always a sprawling intergenerational mix of babies, family born in the U.S. and family born in Tonga.

She estimates that around 200 Tongan people live in Juneau, and says it’s a tight-knit community. And they’ve got family and friends around the world who are doing the same thing everyone in Juneau is doing — checking social media, texting each other updates and sharing what they know.

Telephone links between Tonga and the rest of the world are slowly being reconnected, but they’re unreliable, and the internet is still down.

“Everyone is trying to get a hold of someone in Tonga,” said Margaret Sekona. “So it’s going to be super hard and complicated, but you have to keep trying.”

Her father, Siua Sekona, said he’s been calling for days with no luck.

“There’s no connection,” he said. “It’s ringing, but there’s nothing like an answering machine or something that you can leave a message [on]. Nothing.”

Siua Sekona grew up in Tonga. Right now, his big concern is fresh water. He said most Tongans are not connected to city water, so they rely a lot on rainwater.

But a lot of the fresh water supply is tainted by volcanic ash and saltwater from the tsunami. A few aid flights have landed, and at least one ship has docked with supplies. But the family worries about there being enough to go around.

At one point, Margaret Sekona sits down at the dining room table hunched over her phone. Her father and Ma’ake huddle in.

Someone on the country’s main island, Tongatapu, managed to get a connection and live-streamed a drive through the devastation.

Margaret turns and looks at her dad. “Can you tell where this is?”

He pauses for a moment and then shakes his head. “I couldn’t really tell.”

She said she’s surprised to see buildings and houses standing, cars driving along the road. There are broken windows and downed trees, and everything is blanketed in this dark film of mud and ash.

“It’s a little comforting though, for sure, to be able to see at least something,” she said. “But you can still see there’s so much damage.”

Even though what she sees on the screen right now is terrible, it’s better than what she imagined.

Siua Sekona said it’s hard to know the extent of the damage right now, but he is hopeful. He has seen what happens after the islands take a hit. He said Tongans are resilient and won’t wait for the help that’s coming from other countries — they’ll help themselves and each other.

“They were sharing everything that they can share, and I was really touched by that,” he said.

He told the family that everything in life happens for a reason.

“I don’t belittle the experience that happens to them because I was one of those victims before. I feel for them, I pray for them. But, [at] the same time, I always look to see what’s coming behind the experience,” he said. “I know that they’ll feel the love and prayers of people everywhere — even people that are not Tongans. It’s amazing how this kind of catastrophe [brings] people together.”

This whole experience takes him right back to his own childhood. In 1982, one of the deadliest storms in Tonga’s history struck. Cyclone Isaac killed six people and left 45,000 people homeless.

When he sees the video on Margaret’s phone, his hand’s shake.

“It seems that I’m — I relive the experience again,” he said. “Because I know exactly how it feels.”

Siau Sekona says he was on one of the outlying islands at the time, on a mission for the Mormon church. He woke up at 2 a.m. as a storm surge swept him from his bed.

“You know, we were swimming because the wave was so high,” he said.

He remembers that most of the buildings were blown away, and everyone spent the night outside in the dark waiting for the sun to come up so they could figure out what was left behind.

He’s thankful that this time around, the eruption and tsunami happened during the day so at least people were able to see it coming. 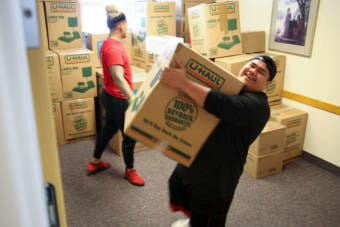 Anchorage's Polynesian community has collected thousands of pounds of clothing, food, water and other goods for Tonga. 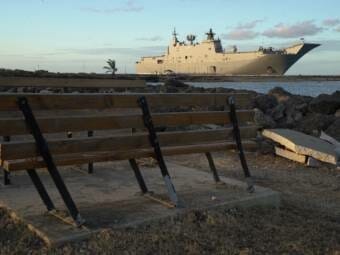 Two workers tested positive Tuesday, local media reported, after the Ministry of Health increased testing at the wharf they worked at amid a flow of international aid. 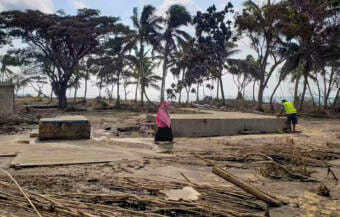 Why Tonga is opting for 'contactless' humanitarian aid

The emphasis on keeping disease out is rooted in Tongan history. Years ago, Westerners brought diseases like smallpox, the plague and measles into the country