Despite the darkness, rain and biting wind, they spent more than an hour talking about their memories of loving and being loved by Farnsworth. He was last seen more than a month ago walking on a trail near downtown.

No one said it explicitly, but the knowing laughter and the memories people shared with his grandmother on Wednesday evening made it clear that Doug Farnsworth knew how to have a good time.

“I had a lot of crazy times with your grandson,” said one woman who didn’t identify herself. “I won’t say what I did with him — with our friends — but I really appreciate you sharing him with us, cause he was a light.”

Jayme Donahue said it was deeper than just good times.

“You know, I just — I didn’t have like the picture-perfect upbringing, and I was always running from my home,” she said. “His home was always open to me, and he had this kind spirit that I just clung too.”

Donahue said the process of physically searching for his body has been really emotional for her. She said she searched the beach front along Overstreet Park where the group stood overlooking Gastineau Channel. She wiped away tears several times as she asked people at the vigil to remember to reach out to each other. To push past discomfort and social norms and connect with others.

“I just really encourage people to judge less and feel more and be there for those they love,” she said.

She said she didn’t always do that for Doug when he reached out to her, even though they’ve been friends since middle school.

Farnsworth is a 32-year-old Juneau man whose family reported him missing on Sept. 29. His older sister, Kiersten Farnsworth, says she and other family members believe he is dead. They’re offering a $5,000 reward for anyone who helps them find his body.

Kiersten Farnsworth lives in Arizona and flew up to Juneau to look for him. She has since had to go home. But she has been very active on social media, organizing search efforts and checking in with police and Alaska State Troopers with whatever information she can find. Juneau Police said Thursday that it’s an active case and they’re following up on leads, but they don’t have any updates.

Even though she’s thousands of miles away, she organized the candlelight vigil for her brother. Then she lit a candle of her own and watched from afar, commenting online as each person spoke about him. She said she doesn’t want people to forget that he’s still missing.

Barbara Charles, Farnsworth’s grandmother, thanked everyone for coming out and continuing to search for her grandson. She said she misses him running into her home, wrapping his arms around her and telling her she is the most beautiful woman in the world.

Juneau family members carried a large wooden cross and photos to put in the center of the group. They tried to light candles, but the wind didn’t cooperate. Someone else passed around glow sticks for people to hold. There were a lot of hugs and inside jokes.

It’s tricky to piece together exactly where Doug Farnsworth went the night he vanished, but Kiersten Farnsworth has footage of a truck he was driving on Basin Road at around 4:30 a.m. Then someone sent her a screenshot of him walking down the nearby Flume Trail at nearly 7 a.m. She asked that anyone who lives in that area check their game cameras and surveillance videos from Sept. 29 to try and spot him.

Volunteers are trying to organize a group search of the Basin Road area in a Facebook Group called Help Find Doug.

The Farnsworths are Lingít, and they have a lot of extended family in town. As the vigil wound down, one woman stepped forward to tell the crowd that there is no goodbye in the language, only the parting phrase “I will see you again.”

“So tsu yei ikḵwasatéen tsá tsú — until we meet again. That’s how deep that word and phrase is,” she said.

Correction: A previous version of this story misnamed the bridge the crowd gathered near for the vigil, it is the Douglas Bridge. 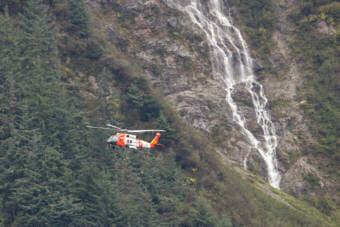