Over the weekend, Juneau Drag performers hosted their first live show in 15 months.  They invited people for a rowdy night of in-person, maskless entertainment — with just one catch.  You had to be vaccinated to get in the door of the Red Dog Saloon, and you had to prove it.

A short line snaked out of the door just before the 10 p.m. show on Saturday night. People waited to show their vaccine cards and IDs as Gigi Monroe’s voice drifted out from the swinging saloon doors.

“We’re putting the final touches on our drag backstage. Showtime in 5 minutes,” she said.

Once you got inside, it was a little like stepping back in time — or maybe into an alternate reality where the COVID-19 pandemic doesn’t exist.

People are hugging. It’s hot and sweaty and vibrantly queer, there’s lots of glitter and gender-bending — there’s a shirtless bartender in suspenders. Virtually no one is wearing a mask.

People are saying this is the first time they’ve gathered with so many other people in a long time.

“It’s strange but it makes me feel safe,” said Abi Spofford, after she showed her vaccine card and walked into the bar. “I would support doing it in other places.”

The music starts to come up, people start to settle into their seats and are looking up at the glittery black curtained stage expectantly.

“Get this party started on a Saturday night,” she crooned along with P!nk, whose iconic song set the tone for the night.

It’s a classic bait and switch and it worked so well. People’s mouths dropped open comically. The energy is high and the excitement palpable — and for Monroe, whose non-stage this was a moment of realization.

“As soon as I came out and I saw that our audience, instead of sharing like — the balcony level and the floor level to spread out more, everybody clustered together on the floor level and got as close as they could because they were just dying to have that experience and that was my signal that everyone was ready for it,” she said.

Monroe and I caught up later in the week to chat about the show and days later, she’s still a little hoarse.

“I completely forgot how to use a microphone,” she said, laughing.

It was an adjustment to go from more than a year of digital drag shows — where she really only had to be dressed from the belly up — to a night of wearing high heels and cinching herself back into fully-corset outfits.

And there were other worries too.  When the Centers for Disease Control and Prevention, and City and Borough of Juneau guidelines relaxed vaccinated, indoor gatherings, Monroe said she wasn’t sure that people were ready to pack back into nightclubs and live shows.

She even mapped out possibilities with her husband Jeff Rogers — essentially things to do if the audience seemed uncomfortable or reserved.

“He went through ‘well you know maybe, you might need to lead them through like ‘turn and wave to your neighbor and then shake your neighbor’s hand and then eventually throughout the show it ends with — you know — hug somebody. This incremental process of getting people ready for physicality and intimacy.’ But they were ready to go right out the gate,” Monroe said.

And, for the most part, everything went smoothly — it was just like riding a bicycle. No one forgets how to be social or how to enjoy a live show. They just sometimes need to be coaxed back into it, she said.

But, there were some things that were different. If you paid close attention, you’d notice that she kind of kept her distance from the crowd. The other performers did too.

Usually, they weave through the audience — amping up the crowd, teasing tips out of them. But, Monroe says they discouraged that during this show and asked people to consider tipping digitally or toss money into buckets near the stage.

For the most part, people complied with all of the rules. They kept their distance from performers. No one at the door seemed to mind showing their vaccine cards. Though, I did see one woman get in mid-show who hadn’t bought a ticket or brought her vaccine card. She swore up and down to the door guy that she had been vaccinated though. At any other time, that would have been a normal part of going to a live show — but it felt particularly weird when show organizers were clearly trying to create a safe space for people.

The troupe did two shows, one early and one late. Each was capped at 100 tickets. Both sold out. Monroe says there was some uncertainty in hosting an event that large.

“I kept waiting for someone else to do it – someone else to be the first big event, whether it was for vaccinated-only or not. But just to try to host something indoors that was for a larger audience. And no one had done it, so. As time went on I said ‘ok, I really didn’t want to be the first one to push this. But, I really believe in it,” she said.

Some people in the Juneau Drag troupe were hesitant too.

“I think on the performer side of things, it was a smaller cast because not everybody was ready to take that leap with me,” she said.

For now, they’re done with digital drag. Monroe says for those performers or audiences who don’t want to be indoors yet, they got two live outdoor shows in Skagway and Sitka coming up this summer.

Skagway officials are preparing for nearly 100,000 cruise ship passengers to visit this summer, and are taking steps to make sure the same sort of outbreak doesn’t happen on their side of the border. 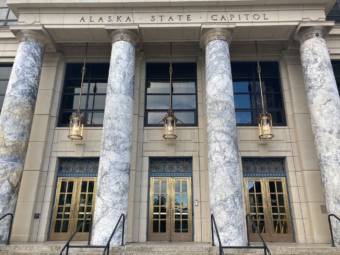