The Alaska House of Representatives’ floor session on Friday was cut short over a dispute about the message on a member’s face mask.

Today’s session was delayed by an hour, with House leaders talking with Kurka at various times during the delay.

House leaders told Kurka that the mask was not appropriate and offered him a plain mask, which he declined, according to a House majority caucus spokesperson.  The majority includes 15 Democrats, four independents and two Republicans.

On Monday, Kurka criticized the rule that he had to wear a mask during the floor session, before taking his mask off and leaving the session. He later wore the mask with the message on it during committee meetings.

House leaders told the leadership of the Republican minority caucus earlier this week that Kurka wouldn’t be allowed to wear the mask during the floor session, according to the majority spokesperson.

The leaders wouldn’t hold the session as long as Kurka refused to comply.

House leaders consider the mask to violate standards that members adhere to a professional business attire dress code. These standards also prohibit members from having drinks with logos on them during floor sessions. These standards were conveyed to members before this year’s legislative session, but they aren’t written in the Legislature’s rules.

The House is scheduled to hold another floor session on Saturday. 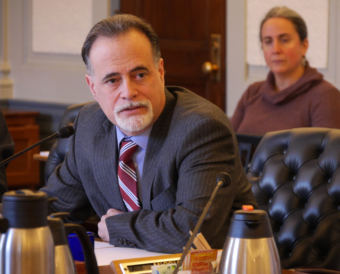 House Speaker Stutes also says it would be a challenge to pass PFD plan before considering how to pay for it. 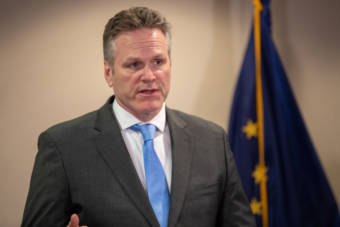 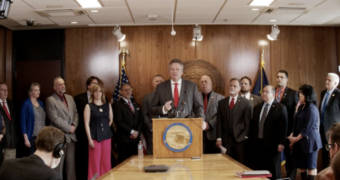 New proposal from Gov. Dunleavy would put PFD in Constitution, along with rural electricity fund

Dunleavy said he’s supporting a draft constitutional amendment that would restructure the way the Permanent Fund is managed — a goal that lawmakers have tried and failed to achieve for the last several years.