A Juneau health care worker had an anaphylactic reaction Tuesday and was hospitalized in the intensive care unit after being injected with the COVID-19 vaccine produced by drug companies Pfizer and BioNTech, officials said Wednesday.

The woman spent the night in the ICU at Juneau’s Bartlett Regional Hospital and was taken off epinephrine early Wednesday, officials said at a news conference. She’s expected to be released from the hospital on Thursday, according to a press release from the hospital.

And in spite of her reaction, the woman was still enthusiastic about having received the vaccine and was disappointed to lose her opportunity to be injected with a second dose a few weeks later, said Noble Anderson, one of her doctors.

“She encouraged all of us to press on,” Anderson said at a Wednesday news conference.

The woman’s anaphylactic reaction is the only one reported in the country so far, the CDC’s deputy director for infectious diseases, Dr. Jay Butler, said at the news conference. And the state is not planning any changes to its program for distributing the COVID-19 vaccine, said Dr. Anne Zink, Alaska’s chief medical officer.

“There were over 40,000 people in the trials and we did not see any reactions like this,” she said.

Zink summarized the event by relaying a comment made by one of the providers who treated the woman’s reaction: “Lightning is going to strike somewhere.”

A second health care worker at Bartlett Regional Hospital experienced a milder allergic reaction to the COVID-19 vaccine on Wednesday.

Within a few minutes of receiving the injection, a male staff member of the hospital had mild symptoms of an allergic reaction, including puffy eyes, a scratchy throat and light headedness.

His reaction is not being considered anaphylaxis. He was treated in the emergency department and released within an hour.

Regulators had already warned medical providers to be on the watch for allergies after reports that two British health care workers also experienced anaphylactic reactions when they were injected with the Pfizer/BioNTech vaccine last week. Alaska hospitals are keeping recipients of the vaccine under observation for a period of time after their injections.

Pfizer has said there were “no safety signals of concern” identified in its clinical vaccine trials, and anaphylactic reactions to vaccines in general are rare, estimated at just over one per million doses.

The woman’s symptoms began 10 minutes after she was injected with the vaccine, when she felt flush while she was still being monitored in the hospital’s foyer, officials said. She took a Benadryl but still felt short of breath and was transferred to the emergency room, said Lindy Jones, the doctor who treated her there.

Jones was concerned about an anaphylactic reaction and gave the woman a “standard treatment” of epinephrine, and she “responded immediately,” he said. She was also given other antihistamines, including Benadryl and Pepsid, as well as steroids, which Jones described as another standard treatment for anaphylaxis.

Because the woman’s symptoms returned when she was taken off epinephrine, she was moved to the ICU for observation and kept overnight. Providers plan to discharge her Wednesday evening, “assuming there’s no further symptoms now that she’s off all medication,” Jones said.

CDC employees are now working with Bartlett clinicians to analyze results of lab tests given to the Juneau woman “so that they can learn from this experience more,” Zink said.

“The system worked exactly as you would hope it would in this situation, to make sure that we’re able to respond and to learn,” she said.

Bartlett, along with Anchorage’s Alaska Native Medical Center, was one of the first places in the state to inject workers with the COVID-19 vaccine Tuesday. Bartlett officials said 96 people have been vaccinated at the hospital.

A spokeswoman for ANMC, Shirley Young, said no allergic reactions have occurred at the Anchorage hospital. 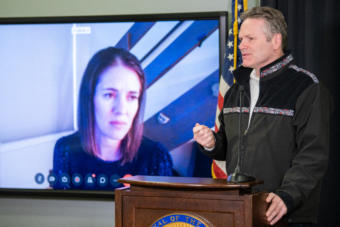 Gov. Dunleavy will get COVID-19 vaccine, but stops short of recommending it for Alaskans

“So I’m going to do what I think is best for me,” Dunleavy said at a news conference on Tuesday. “I would encourage others to do what they believe is best for them.”

'The beginning of the end of the pandemic': Juneau's COVID-19 vaccine has arrived 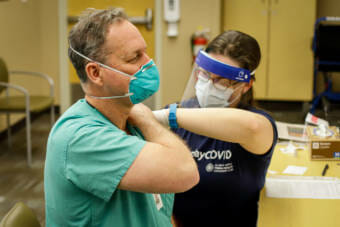 The first doses of the coronavirus vaccine were administered in Alaska on Tuesday morning.