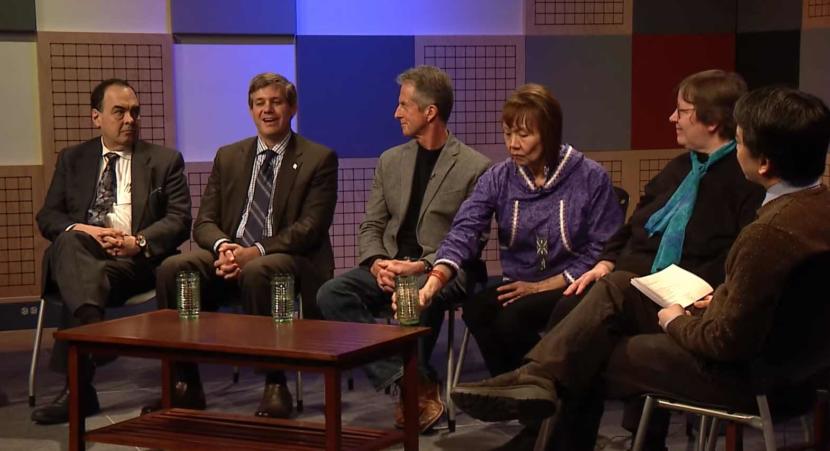 From the bowhead whales harvested in Barrow to the fire resistant cushions in our living rooms, industrial chemicals linked to cancer and developmental problems have found their way to Alaska.

Panelists include: Pam Miller, a biologist and the executive director of Alaska Community Action on Toxics, Tony Stefani, a retired San Francisco Fire Department captain and founder of the San Francisco Firefighters Cancer Prevention Foundation, and Vi Waghiyi, from the Native village of Savoonga and ACAT’s coordinator for community-based research on St. Lawrence Island.

Pam Miller is the founder and executive director of Alaska Community Action on Toxics. The environmental health and justice organization works with locals to conduct field research and advocate on issues dealing with chemical contaminants. Miller is a research biologist by training. Her work has appeared in various publications, including peer-reviewed scientific journals.

Tony Stefani is a retired captain of the San Francisco Fire Department. He’s a featured character in the 2013 documentary “Toxic Hot Seat” and an advocate against the use of toxic flame retardants in household goods because of their ineffectiveness and health effects.

Stefani founded the San Francisco Firefighters Cancer Prevention Foundation in 2006 after being diagnosed with cancer himself.

Bill Wielechowski is a Democratic state senator who has represented parts of Anchorage since 2007. He’s made several legislative attempts to ban products from Alaska that contain toxic flame retardants.

In 2010, 2011 and 2012, a Seattle burn ward doctor testified against Wielechowski’s flame retardant legislation, citing horrific cases of children suffering burns from fires exacerbated by household products untreated with flame retardants. The Chicago Tribune and the Anchorage Daily News later exposed the doctor for fabricating burn victim anecdotes and misrepresenting himself as an impartial expert witness in several state legislatures. The doctor was on the payroll of the chemical industry.

Donny Olson is a medical doctor and a Democratic state senator who’s represented much of rural Alaska since 2001. Olson sponsored Senate Bill 151 in 2014 to ban products treated with certain flame retardants from Alaska, and to make the state participate in an interstate chemicals clearinghouse.