A remedy is on the way to overcome a barrier to visitor movement through one of Alaska’s premier tourist attractions. But it still will take some time to happen.

The National Park Service has selected a contractor to build a bridge over the halfway point of the sole road through Denali National Park and Preserve, a site where intensifying thaw has triggered an ongoing landslide that has made the area impassable. If all goes according to schedule, park visitors will be able to travel the full road by the summer of 2025, said Brooke Merrell, the park’s superintendent.

The site, an exposed, high-altitude, steep area called Pretty Rocks, has been closed to traffic since late August of 2021, when park managers could no longer maintain it safely. It has since slumped so far that a section of road has been obliterated.

The scheduled construction, expected to start in May, will mean the passage of three full tourist seasons without access to the second half of the Denali park road — a headache for the tourism industry, but a necessary step to ensure future access, Merrell said.

“You just can’t look at it and not immediately understand why that project is necessary,” she said.

Another reality is that climate change is reshaping the landscape and creating new hazards.

The contract with Granite Construction, a California-based firm with an Alaska regional office and several Alaska operations, was formalized last week, Merrell said. The cost of the project is capped at $102 million, she said.

Money to complete the project has been made available by the recently passed omnibus budget bill. That $1.7 trillion package includes $1.5 billion for the National Park Service to address impacts of natural disasters, which will include the ongoing landslides in Denali, as well as wildfire and flood impacts in other parks.

While there is not a specific amount of money designated for Denali and its road fixes, there will be enough to get the work done, said Sen. Lisa Murkowski, the Alaska Republican who helped write and shepherd the package.

“What we have done in this measure is we have ensured that the funding to support the road will be covered in full, so that we do not miss yet another season,” Murkowski said in a Dec. 23 news conference. “It’s a bigger project than anybody had ever anticipated, and so it did require additional funding.’

Previously, $25 million had been set aside for the project through the Infrastructure Investment and Jobs Act.

The ongoing Pretty Rocks landslide, tumbling down a high slope that overlooks some braided tributaries of Denali’s Toklat River, is part of a trend in mountainous areas all around the far north. Warmer air temperatures and more rainfall has thawed permafrost soil and loosened the ice-laden, high-altitude geologic formations known as “rock permafrost.” Additionally, in some areas, slopes are being destabilized by the melt of glaciers that buttress mountains.

Effects can be dramatic and disastrous. In Greenland, a localized tsunami produced by a thaw- and melt-induced landslide in 2017 killed four people in the fishing village of Nuugaatsiaq. In 2015, a mountainside collapsed in a remote coastal area of Wrangell-St. Elias National Park and Preserve, dumping enough rock and sediment into a fjord to cause the fourth-highest tsunami ever recorded. Glacier Bay National Park and Preserve and neighboring mountainous areas of Canada are also considered global hotspots for these thaw- and melt-related landslides.

Among the areas where frozen terrain is prone to slides, Pretty Rocks stands out.

The warming of air temperatures in Denali has accelerated. From 1950 to 2010, the increase was tracked at a rate of 4.3 degrees Celsius (7.7 degrees Fahrenheit) per century – the highest rate for that period measured at all U.S. national parks, according to the Park Service. Warming has intensified since then; temperatures in Denali rose by nearly 2 degrees Celsius (3.6 degrees Fahrenheit) from 2014 to 2019, according to Park Service experts. May-to-September rainfall since 1950 has also increased, though with a lot of variation, as is the case for the state as a whole.

Geologically, the Pretty Rocks area is precarious because of its composition. It holds a conglomeration of rock glacier, permafrost, clay and other substances layered atop each other.

The location – the midpoint of the only road through one of the crown jewels of the U.S. National Park System – gives Pretty Rocks a high profile.

The slope at Pretty Rocks has actually been moving for a long time. Until the past decade, though, the movement was slow, at times even barely perceptible.

Before 2014, the Pretty Rocks’ slope movement was measured at inches per year, according to the Park Service. It sped in subsequent years to inches per month, then inches per week and then inches per day. By 2021, the rate was more than half an inch an hour, until August of that year, when a section slumped abruptly and the Park Service imposed an early end to some visitors’ Denali trips.

The past season was the first with the full-year closure at Pretty Rocks. Park visitors, generally ferried by shuttle buses, could travel no farther than the road’s first 43 of 92 total miles.

Denali had more than 400,000 visitors in 2022, Merrill said, substantially less than the record 642,809 counted in 2017, but still a busy season.  The road closure itself proved to be a subject of interest, she said. Many visitors who rode the bus to the temporary end of the line walked farther to take in a full view of the collapsing Pretty Rocks slope, seeing first-hand the impact of thaw on Alaska’s mountain terrain, Merrell said.

“It was a very popular hike. It was pretty great, actually,” she said.

This coming season, those unobstructed views won’t be available. Bridge construction will be underway, though the Park Service is striving to limit disturbances like noise and truck traffic, Merrell said.

Even when the bridge over Pretty Rocks’ sliding slope is completed, Denali’s landslide problems will continue.

There are more than 140 other identified sites in Denali where the road is affected or threatened by landslides, Merrell said. That will mean more work in the future to protect the road and visitors, she said.

“We are anticipating that we’ll have more big projects — not a Pretty Rocks, but big, still,” she said.

One project already in the queue is mitigation work at an unstable site called Bear Cave, which is near Pretty Rocks.

One is in Wrangell-St. Elias, where visitors use the 60-mile McCarthy Road to reach the Kennecott Mines National Historic Landmark, the town of McCarthy and other attractions. By mid-century, air temperatures along the McCarthy Road corridor are expected to average above freezing, making slides more likely, according to a study by University of Alaska Fairbanks scientists.

Even far-north Gates of the Arctic National Park and Preserve, located above the Arctic Circle, is projected to have landslide-prone conditions in the future, according to the study, published in the journal Atmosphere. Average air temperatures are on track to be above freezing along the corridor that is proposed to hold a section of a yet-to-be-built industrial road, the study said. Of the 211 miles of road proposed in the Ambler Mining District Industrial Access Project, about 20 miles would cross through the southern part of Gates of the Arctic.

Correction: The original version of the article incorrectly described the bridge. It will be a steel truss bridge, not a suspension bridge. 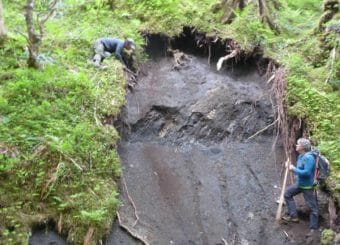