Funding to buy a privately owned icebreaker was removed from the $1.7 trillion spending bill signed by President Joe Biden on Friday morning. The decision delays plans to possibly dock an icebreaker in Juneau.

The U.S. Senate passed the National Defense Authorization Act earlier this month, which gave the government permission to spend $150 million on an icebreaker called the Aiviq. The removal of that funding from the separate spending bill means the purchase won’t happen, at least for now.

But Juneau City Manager Rorie Watt said the federal decision won’t stop the city from planning for one in the future, whether it’s the Aiviq or a new one built by the U.S. Coast Guard.

“I think we still need to plan for an icebreaker, but clearly it’s not happening as soon as people thought,” he said.

Watt recently proposed that the Juneau Assembly spend $300,000 on planning the location of a new cruise ship dock. He said accommodating an icebreaker should still be a factor.

“In the planning for a cruise ship dock, you have to think about all the other uses,” he said. “I don’t think that fundamentally changes.”

A new icebreaker could bring 190 Coast Guard personnel and their families to Juneau, according to Sen. Dan Sullivan, who voted against the spending bill. In a statement, he said removing the icebreaker funding undermines Arctic security.

“This decision could further set back our nation’s ability to provide persistent presence in the Arctic for years,” Sullivan said in the statement. “This is a major disappointment for our state and country.”

On a call with reporters Friday, Sen. Lisa Murkowski called it a frustrating but temporary setback.

“I think we will have yet another opportunity in this next appropriations bill going forward, and I’m certainly going to be pushing to advance that,” she said. “The concern though, quite honestly, is if there are others who may be interested in purchasing [the Aiviq.]”

The Aiviq would have been a temporary solution as the Coast Guard works to buy new icebreakers, according to a congressional report. The Coast Guard expects them to be ready in 2026 or 2027. 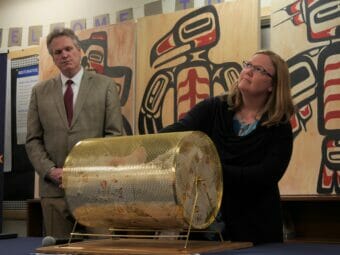