A Dillingham hunter was mauled by a bear on Friday. Alaska State Troopers spokesperson Tim DeSpain said in an email that 40-year-old John Casteel was hunting up the Nushagak River, about 20 miles by air from Dillingham, when he was mauled.

Casteel’s aunt, Marjorie Nelson, said he came upon the bear while moose hunting. The bear attacked, and Casteel called out to his hunting partner, who shot and killed the bear. His partner sent a satellite message requesting help, saying that Casteel had injuries on his arm and leg. He was conscious but couldn’t move.

“They had a nurse with them and other hunting parties that helped stabilize him and control his wounds,” she said. “He stayed out in the wilderness for four hours, laying on the tundra. But you know, those people, the hunting party that he was with, they started a fire and they tried to keep him warm and keep him conscious and awake until the helicopter came and got him. It was a rough Friday night for us.”

It was dark by the time the helicopter arrived. Nelson said the group shot flares into the air to show their location. The helicopter took Casteel to Dillingham.

“The whole time, John was conscious. He was awake during this whole ordeal,” she said. “And after they got him stabilized, cleaned up, they got a medevac out of Dillingham and sent him to Anchorage.”

Casteel has deep wounds on his leg and arm and was in the Alaska Native Medical Center’s critical care unit in Anchorage over the weekend. Nelson says he went into surgery Saturday morning. It lasted for about eight hours.

“He’s still in a lot of pain, but they’re trying to manage that pain right now,” she said. “He’s pretty overwhelmed with what happened to him. And, you know, totally understandable. I can’t imagine. I can’t — it’s overwhelming to me.”

Nelson doesn’t expect recovery to be easy and said Casteel may have to undergo additional surgeries. She added that the family is grateful to his hunting partner and thanks everyone for their prayers. 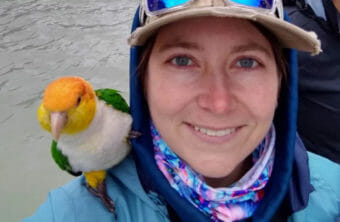