On Tuesday, students at a Juneau summer school program were served a chemical floor sealant instead of milk. Twelve children and two adults drank the sealant. Some of the children were back in school on Wednesday, but not Donna Baldwin’s grandson.

She said that when she picked the 8-year-old boy up on Tuesday, he burst into tears and asked if he was going to die.

He told her the milk burned his throat, that his stomach hurt and that he was dizzy. She took him to the emergency department. She says they checked his oxygen levels, which were normal.

But he’s still dizzy and nauseated a day later. Baldwin says she wants to be sure there’s no permanent damage, so she’s taking him to Seattle Children’s Hospital for some follow-up tests.

She’s one of several parents who told KTOO they felt that calls from the school came much too late. She says the school should have notified families immediately after the incident, not hours later.

“The more I process, the madder I get that it was not immediately taken care of. If I was there, I would have called medical right away,” she said. “This was minimized, and it’s not okay.”

Superintendent Bridget Weiss says the reason it took so long to contact parents was that staff prioritized making sure the kids were safe. They called poison control and monitored the children before reaching out to parents.

“This was a really unfortunate incident. We’re grateful it was an isolated incident. And we’re still learning some pieces of how it happened,” she said.

But she said she doesn’t know who was responsible for that.

“That shouldn’t have happened. So we don’t ever transport or store chemicals with commodities, right? Those are two very separate things,” she said.

NANA Management Services is the contractor that prepares and serves food for the district. Weiss says staff mistook the sealant pouches for milk and put them in the milk dispenser.

“It’s a little hard to imagine unless you’ve used it, but many chemicals do look very much milk-like — they are white, the consistency is the same as milk,” Weiss said.

She said that the sealant is odorless, so staff did not catch the mistake until students drank it.

The school board was scheduled to vote to renew NANA Management Services’ contract Tuesday night. They voted unanimously to postpone that decision. 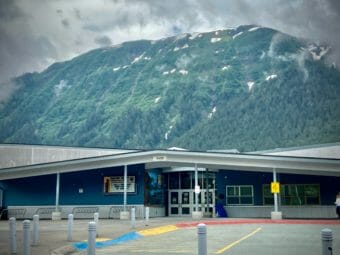