One gallon of unleaded gas costs, on average, about $5 in the U.S. today.

Those prices could be enough to give even the most zealous road-trippers pause. But vacationers hellbent on getting their dream Alaskan vacations say they aren’t going to let anything stop them — not this time.

“It’s been on my bucket list for 40 years,” said Randy Ferguson of Anaheim, Calif. from his camp chair in Soldotna.

Ferguson drove up from Anaheim in his RV for his first ever Alaska trip. And he said it’s living up to his expectations.

Ferguson’s already hit Seward and Homer, and he plans to go up to Denali and Fairbanks, too.

That’s even though it costs as much as $500 to fill up his tank every week or so. He’s spent more on gas in this last month than he did on a 23-state road trip last year.

But it’s a price he’s willing to pay.

John Saranzak is in a similar boat.

Saranzak is newly retried from Dayton, Ohio. And he has the same logic for making the trek now.

“I’m getting older, and I thought, better do it while I can,” he said. “That’s why we’re spending a lot of time here, too, to get to know the area, not just do the tour stuff.”

Still, he’s paying twice as much for gas as he had planned to when he was first budgeting three years ago. That includes the higher-than-normal gas prices in Canada, where he said he paid close to $8 a gallon on the way up.

Gas prices are up — and hitting records — across the U.S. It’s a spike that experts in large part attribute to Russia’s invasion of Ukraine, and one that does not seem to be letting up any time soon.

That’s something all drivers are noticing at the pump. But for vacationers driving RVs, which require a lot of fuel, those costs are particularly notable.

“We had a lot of reservations already set up,” he said. “We take reservations real early, in January and February. And now we’re starting to see some cancellations. But I think a lot of people are trying to stick to their plan, no matter the cost.”

His campground was still packed in mid-June, with RVs sporting a wide array of license plates.

It’s a shift from the last two years, when COVID-19 restrictions made it hard for out-of-staters to get through Canada. Instead, Alaskans were driving RVs around their own state.

“That was pretty different for a couple years,” he said. “But now it’s back to normal, now we’re kind of battling the gas prices and getting knocked backwards a little from that. But I think a lot of people are trying to come. The last couple years have been rough. A lot of them have canceled a couple years in a row. And they want to come, bad.”

He said he hopes the bulk of the cancellations have already happened.

John Anderson with Heritage RV Park in Homer is seeing much of the same. He said most of his 100-plus RV sites on the Homer Spit are full of out-of-staters every night this summer, and he doesn’t anticipate a lot of guests will change course.

His and Belknap’s clients are mostly from the Lower 48. Alaskans coming down for the weekend might have different considerations to weigh.

Soldotna Parks and Recreation Director Andrew Carmichael said it’s too early to tell what will happen at Soldotna campgrounds, where the vast majority of visitors are coming from around Alaska.

He said last year was the biggest revenue year the city campsites had seen in many years.

“Last summer, we were up 22% from the prior year, but the fuel prices weren’t through the roof, either,” he said.

But that was mostly based on other factors. Carmichael said the state of the salmon runs in the Kenai River often play a big role in determining who comes and when.

“I mean, if people are going to come down, they’re going to come down for that purpose, to a large degree,” he said. “But then again, if you could say there was a silver lining to the COVID pandemic stuff is that it got people out and starting to recreate outdoors. So they are recreating outdoors more than they used to. So it’s just hard to say.”

There’s no sure way to tell if campers will cancel their plans for the city-owned sites yet. Sites are first-come, first-serve and the city doesn’t take reservations.

Over at the Klondike, Frances Williams, of Gooding, Idaho, is on the tail end of her trip. She planned the vacation last year, when gas prices weren’t as high.

She and her son flew to Alaska and drove a camper down. Still — it was expensive.

“I mean, it stressed our budget,” she said. “But we were already committed, so it was something — you just gotta do it.”

And they say the RV might be worth the splurge.

“It’s been fun. We’re outdoorsy people anyway,” Williams said. “So seeing Alaska that way, not being stuck to a hotel or anything, it’s been cool, just being flexible and being like, ‘Oh, let’s stop here.’”

When it comes to the prices, she said, it kind of is what it is.

In his eyes, the trip of a lifetime is worth every expense. 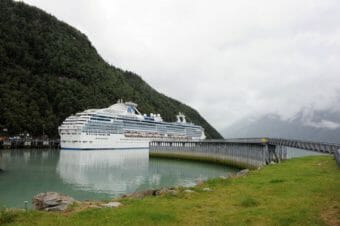 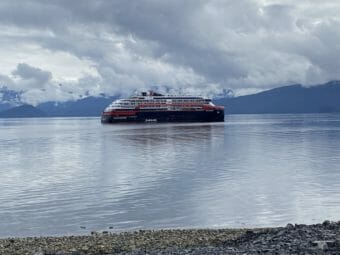 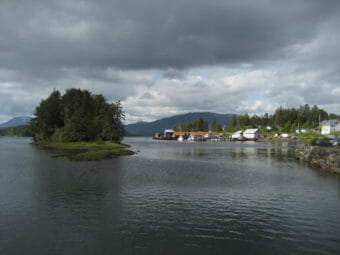 The ships will create opportunities for small business owners, wood carvers and other artisans, says the chief operations officer for Klawock Heenya.