Some anti-abortion advocates in Alaska see a rare confluence of opportunities coming up this year.

With the Supreme Court on the brink of overturning Roe v. Wade, abortion opponents are energized by the prospect that states could soon be free to restrict or even ban abortion.

Meanwhile, in November, Alaska voters will face a ballot question they see once a decade: Should we hold a constitutional convention?

Even some abortion opponents think a convention is a bad idea. But Christian conservative leader Jim Minnery, president of the Alaska Family Council, wants Alaskans to vote yes, in part to stop the state Supreme Court from blocking limits on abortion.

“Every time a reasonable guardrail has been placed around the issue of abortion to protect unborn lives, the court has said ‘we have the final say,’” he said.

That’s why Minnery wants to amend the Constitution, to change how judges are selected and how they apply the privacy right.

“The language is essentially, ‘this Constitution is silent on the issue of abortion, or the funding thereof,’” he said.

A bill to do that is stuck in the Legislature. Two-thirds of lawmakers would have to approve a constitutional amendment to get it on the ballot, and the votes aren’t there. So Minnery thinks a constitutional convention is a good alternative. Some of the more radical members of the right-to-life movement, he said, want to go farther and call for a constitutional abortion ban.

“I’ve been an advocate for right to life, pretty much all my political career,” Coghill said. “Well, actually, all my life.”

Coghill said he feels the frustration of other abortion opponents. He knows how hard it is to get a two-thirds vote of the Legislature. He tried. But he doesn’t think the “pro-life” side can win at a constitutional convention, either.

“I just don’t think the army is there that they feel is there,” he said.

Worse, he said, a constitutional convention puts the entire legal framework of the state in jeopardy. There’s no way to keep the focus limited to abortion and a few other changes Christian conservatives want, he said.

“Pretty soon coming out of the woodwork is going to be 100 other priorities, pressing in,” Coghill said. “There will probably be dark money coming from other places. The environmental community, internationally, would love to see an opportunity to change the way Alaska views its land and land management.”

Coghill is one of the leaders of “Defend our Constitution” — a multi-partisan group urging a no vote on the convention ballot measure.

He’s worried the call to enshrine the Permanent Fund dividend in the Constitution could entice Alaskans to say yes to a convention. He thinks that’s a bad call, too. Coghill’s main concern, though, is that a convention essentially invites the rest of the world to try to impose their vision on the state.

“Even though we would be the ones voting, the money and pressure to come in and change what Alaska is, I think, could be significant. So that’s kind of my worst-case scenario,” he said.

As for the abortion rights advocates, they see nothing good coming of a convention, especially if the U.S. Supreme Court overturns Roe v. Wade.

“We need to protect what’s in the Constitution. Abortion is protected under Alaska’s Constitution. So, you know, this is not the time to open that up,” said Lindsay Kavanaugh, executive director of the Alaska Democratic Party.

Even if voters say yes to a constitutional convention, the process would take years to play out. A yes vote in November would likely lead to an election to choose delegates in 2024. After the convention, a new draft constitution would have to go before voters in another statewide election.

Minnery said he trusts those safeguards. If special interests hijack the convention, he believes Alaska voters will be wise enough to reject what they produce.

“The way I look at it is, we’re going to try as hard as we can to get the constitutional convention passed,” he said. “But if it ends up being something that we don’t like, then we’ll be just as vehement about opposing it.” 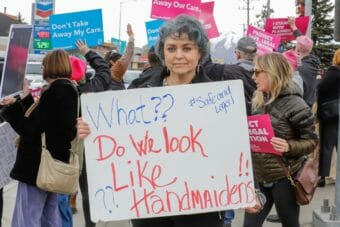