Wearing face masks inside Juneau’s public schools is optional as of Monday. The district’s board of education made the decision last month after the city’s COVID-19 risk level was lowered.

But, on Monday morning, many of the students who filed into Juneau Douglas High School Yadaa.at Kalé still wore face coverings. Jowielle Corpuz was one of those students.

“I have a lot of things coming up with the Alaska Association of Student Governments and a few interviews for a summer job,” Corpuz said. “So I have a lot going on right now. I just don’t really want to risk it.”

Corpuz said so far, it looked like about 70% of people in the school were still wearing masks, but she expected people to take them off throughout the day. She said she thought some students might not have known yet that masks were optional.

Both Corpuz and her friend, Sydney Carter, said they were worried that as more people take their masks off, the number of cases of COVID-19 might spike again.

Esteban Demmert, another student headed to class Monday morning, had his mask pulled down to his chin. He said he was looking forward to having a little more normalcy.

“I only brought a mask in case I go anywhere besides here,” Demmert said. “It’s just gonna be good to see people’s faces again.”

A few miles down the road, at Riverbend Elementary School, Principal Elizabeth Pisel-Davis said kindergartners stared at her in amazement that morning as they unloaded from school buses.

“Because I didn’t have my mask on, they were looking at me with these big eyes,” Pisel-Davis said. “I could just hear their thoughts of ‘Woah, that’s what you look like?’”

By mid-morning, students were running around in gym class, mostly mask-free. Fourth-grader Alani Zeller said she was excited to take her mask off.

“When we were in gym, we would just sweat and then sweat goes into your mask and you have to change it all the time and it breaks so easily,” Zeller said. “I’m kind of fed up about it.”

Other students said they looked forward to eating lunch without plastic dividers between them and their friends. Most of the staff appeared to be maskless too.

Natalie Ward teaches fourth and fifth grade at the school. She said most of her students weren’t wearing them, but still respected those who were.

“Some of them I feel like I’ve never seen their full face before,” Ward said. “So when some of them were walking in I was like ‘Who is that?!’”

Ward said she was happy to see their faces again too because reading aloud and communicating non-verbal queues had been a struggle with masks on.

Christi Martz, who teaches third grade at Riverbend, is keeping hers on for now.

Martz said by continuing to cover her mouth and nose, she hopes to protect her child, who is too young to be vaccinated.

By early afternoon, it was a mixed bag at Dzantik’i Heeni Middle School.

Sixth-grader Ariel Washington said most of the kids in her classes weren’t wearing masks and she wasn’t wearing one either.

“I think the virus is getting better as the days go on, so I’m not wearing it as much,” she said. “Sometimes I used to forget my mask and if I forget it now, it doesn’t really matter.”

Other middle schoolers were still wearing face coverings because they were afraid it wasn’t quite safe yet or because they didn’t want to stand out among their peers.

Masks are expected to remain optional in schools as long as Juneau is at a medium or low risk level. 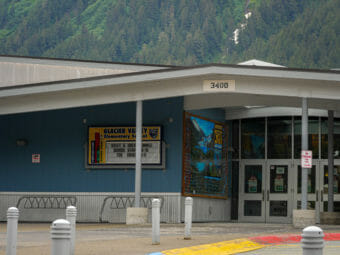