A regional effort to support Indigenous-led conservation and economic development in Southeast Alaska says it’s closing in on an initial $20 million fundraising goal.

Seacoast Trust, an initiative put together with $17 million seed money from Sealaska Corporation and The Nature Conservancy, announced Monday that it’s received an additional $2 million from two philanthropic organizations.

“We are thrilled to be part of such a well-crafted approach to stewardship and economic development in Southeast Alaska,” Rasmuson President and CEO Diane Kaplan said in a statement. “Strong, local leaders and broad support are key. We are especially delighted to have Edgerton Foundation as a ground-floor partner.”

The Southeast Sustainable Partnership, a decade-old effort that runs projects in towns and villages across Southeast Alaska, will coordinate the Seacoast Trust projects.

Financial oversight of the Seacoast Trust comes from Spruce Root, a Juneau-based nonprofit with ties to Sealaska.

Sealaska announced it’s earlier this year that it’s transitioning away from large-scale logging. The Seacoast Trust is one of the initiatives it says it hopes to expand economic opportunities in Southeast Alaska’s communities that had.

The trust has said in its statements that the long-term goal is to create a $100 million fund that could provide about $5 million annually for economic development in communities across Southeast Alaska. 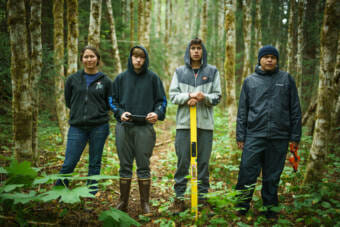 Sealaska Corporation and The Nature Conservancy have set aside $10 and $7 million respectively in seed money to help support the fund.