A grassroots effort in Wrangell to erect a mariners’ memorial is reaching its final stage. Volunteers are ready to start etching the names of those lost at sea or otherwise passed on.

Over the last two years, Wrangell Mariners’ Memorial has leapt from the pages of theoretical design onto a quiet plot of land at the mouth of Heritage Harbor. Curved, trapezoidal walls evoke the hulls of ships and lead up a slight hill to a red and white octagonal gazebo. It’s a lighthouse, with a compass rose in the center.

Mariners’ Memorial board member John Martin said this is a pivotal time for the memorial, located about a mile south of downtown.

“It’s been fascinating to watch,” said Mariners’ Memorial board member John Martin. “We found a site, we selected this site, we upgraded the site, pretty exciting stuff. They placed the big steel structures there, and the whole thing is getting more interesting all the time. But now we’re at the powerful point, this is where the individuals are going to make the connection to the whole thing. They’re going to have their family member’s name up on this memorial.”

Wrangell fisherman Gig Decker is a volunteer board member. He said Wrangell’s history and development are tied to the water.

“As far as seafaring people, it goes back 10,000 years,” Decker said. “When you live in a small community, and it’s a very supportive community — we are the type of community where we want to be a part of other people’s lives and the things that they care about.”

While the idea of a Wrangell Mariners’ Memorial has been around for decades, the project was really kicked into gear about 16 years ago, when Wrangell high school seniors who lost their captain at sea revived the idea of a local memorial site.

The Wrangell Mariners’ Memorial incorporated as a nonprofit organization in 2017.

Jeff Jabusch is the group’s treasurer. The community has fundraised tens of thousands of dollars for the memorial’s development.

“I think we’re really not that far from the end,” Jabusch said. “The big things were the concrete and the getting the walls up, we’ve got one more wall, it’s pretty much done. It’s just got to be set in there. Then it’s getting the plaques up.”

To fundraise for ongoing maintenance, final construction, and getting plaques installed, the Mariners’ Memorial Board hosted an all-day, catch-all sort of event Thursday.  There was a silent auction and membership sign-ups. The event was also where applications opened for memorial plaques, and sample plaques were available.

“We ordered a couple, so we could have them in hand. We wanted to feel them, we wanted to see what the lettering looked like on them, we wanted to look at a couple different colors,” said the board’s president Jenn Miller-Yancey. “And so people will be able to take a look and see what three lines and four lines look like on a plaque and hold them. They’re pretty heavy, heavier than I expected them to be. And then also being able to just talk about the application, answer any questions and guide people through it.”

The process of getting plaques won’t just be one of the plaque design itself.

“Part of it is ‘what do you want the plaque to look like?’ The other part is to tell your mariner’s story,” Miller-Yancey said.

It won’t just be a name memorialized, but a story as well, Decker said.

“I think that’s going to turn out to be a very attractive part of this, because we do want to share each other’s grief and joys,” he said. “It’s part of what really makes Wrangell a very unique place.”

Decker said the stories of mariners recognized in Wrangell will be stored on the board’s website, but he also hopes to eventually put together a physical book of mariners’ stories that could be sold in Wrangell’s museum.

It’s taken an immense amount of time and effort to get the project to the point it’s at, Miller-Yancey said.

“I couldn’t even begin to count the hundreds of hours that every individual has put into the research and the pieces and the parts,” she said. “There’s no better team. These old guys here, they’re pretty amazing. Everybody brings something unique and special to the table. And I think it’s been a great representation of our community.”

But it hasn’t just been the efforts of the volunteer board that brought the project to this point of near-completion.

“Since I’ve been serving, I couldn’t begin to also count the amount of support that people have emailed, text, called, ‘what can I do?’ Or just wanting to know how the project is going,” Miller-Yancey said.

She said that she’s been blown away by the commitment of the community, from Wrangellites of all ages.

“When we put the compass rose into the pavilion, I don’t know how many kids we had help with that,” Miller-Yancey said. “It was truly amazing, that they all wanted to be there and that they chose to be there because they also are very proud of the project, even as young people. And of course, we hope that those young people grow up to be people sitting around this table in the future that help keep that project alive and going.”

The City and Borough of Wrangell funded the memorial’s design and provided the land. The spot is near the water, between Heritage Harbor and the cemetery. Decker said that connection between the boats leaving and returning, and the final resting places of generations of Wrangellites, was intentional.

“Part of the design of it, too, is to border it with beach grass,” Decker said. “And that will give it — if we’re successful with it, which it looks like it grows everywhere — if we’re successful with it, I think it’s going to give it that transition feel to it between what’s going on now and what’s happened in our memories and out on the water. I think it’s gonna be killer.”

One of the most deadly marine disasters in Alaska history happened near Wrangell — the wreck of the Star of Bengal, an iron-hulled sailing vessel that went down in a storm in 1908, killing one crewmember and 110 of the 111 cannery workers onboard — migrant workers from China, the Philippines and Japan.

Decker — a licensed commercial diver — helped locate the century-old shipwreck, and said he wants to make sure those lives are remembered.

In a small, close-knit community like Wrangell, many have personal connections to marine tragedies, too.

Decker and his wife Julie lost their college-aged children a year and a half ago in an automobile accident during the fishing season on Mitkof Island south of Petersburg.

“They grew up on a fishing boat, fished all their lives, never had a summer off since they were babies,” Decker said. “So it’s a very special thing for me — for us. It was very special to me even before we lost our kids. I think it’s a really necessary thing in a town like this to be able to share people’s grief. It’s very positive for people to do that with each other, and it’s a great place to go to and to meet. It’s going to be very significant for us down the road.”

The commercial fishing captain who died in 2005 whose high school-aged crew revived the idea for the memorial was Ryan Miller, Miller-Yancey’s husband.

And John Martin, who lost his father in a commercial fishing accident when he was a toddler, said having a place like the Mariners’ Memorial to come and reflect will fill a need.

“To put it in the simplest terms, I lost my father a fishing boat when I was two years old. And now there’s a place for all that to fit,” Martin said. 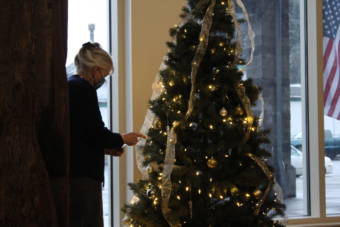 For many, the winter holidays are a time of togetherness. But they can also be a stark reminder of loss. 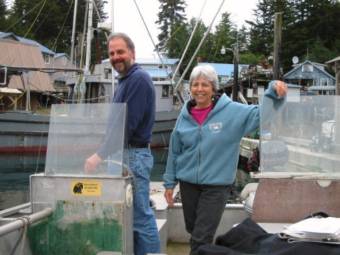 Today, and nearly every day at 2:45 p.m., Lord-Wild records Elfin Cove’s temperature and precipitation, and sends them off to the National Weather Service.