More details have emerged about circumstances surrounding the Aug. 31 killing of a bear outside the Haines Sheldon Museum. The Alaska Wildlife Trooper on the scene has suggested the Haines police chief may have accidentally wounded the bear, leading to it having to be put down.

An adult male black bear had been grazing outside the Haines museum and eating from an historic apple tree out front. A sign by the tree says it’s “a yellow transparent apple tree planted 100 years ago by Charles Anway for the children of Haines.”

Sheldon Museum staff had secured a loaner electric fence to put up around the 100 year old tree, but it was stolen from the porch the day before. Museum Board President Kelleen Adams says museum employees had seen signs of the bear a few days before.

“It wasn’t something that had been going on for a month and no one had done anything about it. The bear had actually started showing up a couple of days prior just, we would see bear scat around the tree,” Adams said.

The bear was ultimately euthanized by the Haines police chief and an Alaska Wildlife Trooper on the morning of Aug. 31. In his report released to KHNS, Scott says he’d attempted to haze the black bear from the top of the museum apple tree using cracker shells and beanbag rounds.

Wildlife Trooper Colin Nemec was also there. He says one of the chief’s shots injured the animal, which fell out of the tree.

“One of the rounds that the chief shot at the bear either penetrated or broke a bone or something like that and injured the bear,” Nemec said. “I’m not going to speak directly at the condition of the chief’s firearm, because it was his firearm, and he needs to be the one to speak about the condition of his own weapon.”

In other words, he couldn’t say what type of round had injured the bear. Nor would his agency be looking further into the incident.

Scott has declined several times to be interviewed. He released a written statement saying they were concerned about the significant safety risk posed by the bear. He said they considered waiting for the bear to come down or forcing it down, but both options risked coming into conflict with community safety.

“With each of these options the animal is in direct control of the outcome. Unfortunate the one option we can control is the animal’s euthanization,” Scott wrote.

Nemec said Friday that once the bear had been injured, it was decided that law enforcement had to  finish it off.

When asked what happened with his firearm, the police chief said that he did shoot the bear with a “less lethal round.”

“The round unintentionally over penetrated and wounded the animal, once wounded it had to be put down,” Scott wrote in an email Friday.

There’s nothing in Scott’s official report that suggests the bear had been accidentally wounded. He wrote that officers were concerned with the pedestrian traffic in the area on Main Street and First Avenue as a potential threat to public safety. Scott reported he made four attempts to haze the bear from the tree with less lethal munitions, which were unsuccessful, and the bear was then “put down.” He noted the potential reasons for the incident as the animal had been “feeding on human food previously,” and the “animal had lost fear of people.”

The bear had been in the area, apparently attracted by the ripe apples in the tree.

The day before the bear was killed, museum accountant Burl Sheldon — who is also a KHNS DJ — picked up a loaner electric fence from the local Fish and Game office but left it outside the museum, where it was stolen.

“At about six I came back expecting to open and assemble and put up this electric fence, and somebody stole the electric fence off the front porch, the green duffel bag and everything that was in it,” he said.

Then he filed a police report and went home.

“I don’t have a fence at six o’clock, Fish and Game is closed. You know, if I happened to have one in the back of my car, I’d have put it up. But I didn’t have one,” he said.

In hindsight, Sheldon says he regrets not putting the fence up sooner and says in the future the museum should put up a fence in the first week of August. Because the next day, the bear was back in the apple tree.

Alaska Department of Fish and Game wildlife biologist Carl Koch says he can’t comment on the decisions taken by law enforcement. He reiterated that the public can only legally kill a bear out of season in defense of life and property.

“Technically this is termed an agency kill versus defense away from property, which is often a lay person,” he said. “People who have a bear on their property, or they’re out in the wilderness, and they have to defend themselves.”

Nemec, the wildlife trooper, says his agency is not investigating the circumstances of the bear’s death. But he will be conducting firearms drills with the Haines Police Department in the coming weeks.

“So I’m going to conduct a training with the police department with just updating and refreshing everybody on how to use hazing rounds, and kind of what’s the best practices for hazing bears,” he said.

Nemec says the Haines borough, law enforcement and Fish and Game offices are all working together to mitigate bear problems. Last year was a banner year for bear problems in the community with 26 killed outside the hunting season.

One of those included a bear shot and killed outside Scott’s garage. State officials are continuing to investigate the circumstances of the Oct. 9 killing of that mature brown bear.

Kelleen Adams says the museum will maintain an electric fence there moving forward.  She says she wishes there were other means of handling the situation so that the bear could have lived.

“It was unfortunate, we’re very, very sad that it happened that way. And we do not want this situation to happen again. So we’re being very diligent in keeping that tree protected. For the tree itself, which is a 100 year old tree, and for the community and for wildlife,” she said.

The hide and skull were turned in to the local Fish and Game office, as per state law, and the meat was donated to a local family as other charity organizations were unable to take the animal, according to the police report.

Adams said the museum will be hosting a community apple picking event in the coming weeks. 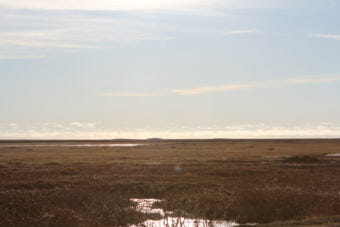