A step aerobics class geared towards Anchorage’s Pacific Islander community has been booming in recent weeks. Advocates say the popularity stems from Islanders’ renewed commitment to health and fitness in a community hit hard by COVID-19.

It’s called Ragecity Steppers, and instructor Pate Ofiu says he’s seeing more people every week. He started the classes a few months ago after moving back to Anchorage from Utah. He’s impressed by the turnout.

“Seeing my people come out and workout alongside me and seeing them get active, get fit, and just creating a healthier lifestyle for themselves again — it just means a lot to me,” he said.

At 7 p.m. on Tuesday at the O’Malley Sports Center in South Anchorage, dozens of people flooded into the gym and dropped their plastic steppers onto the gym floor.

Ofiu teaches the hour-long class six nights a week. The high-energy class starts with stretching, then moves on to intense stepping combined with hip-hop moves as the music of Lizzo and Lil’ John blare over the PA system.

“It is accurate to say step aerobics, but it’s a lot more extreme — let’s say, very high intensity, based off of the music,” he said.

The class is open to all, but it’s mostly Pacific Islanders who come, he said.

“I think it’s only like that because the instructors are Pacific Islander — someone they can relate to,” he said.

It helps that it doesn’t take much equipment — just a plastic step and workout clothes. But Lucy Hansen, president of the Polynesian Association of Alaska, said that’s a barrier for some in the community.

After coming to the class for the first time a few weeks ago at the invitation of her sister and niece, she saw how popular it was becoming. She decided the Polynesian Association should support the group, so it purchased 30 steppers for those who didn’t have their own.

“A lot of them came out. And kids that came out — most of them don’t have steppers. So I said, ‘You know what? They’ve been stuck in at home over the last year. Now they’re out and they’re enjoying to be with their parents,’” she said.

Focusing on community health is new for the Polynesian Association, which was forced into the role when COVID hit. Hansen and other community leaders worked with city health officials to push advertising campaigns for masking, and later, for vaccinations, after data showed Islanders’ vaccination rates lagged behind other demographics.

Hansen said the pandemic forced the community to face high rates of underlying health conditions, like obesity and hypertension, which she thinks is part of the reason for the popularity of Ragecity.

“I think it’s a new leaf that we need to look at, in order for us to teach our young ones to come out and be active,” she said.

Hansen said she hopes that when the next pandemic hits — even if it’s 100 years from now — the community will be healthier. 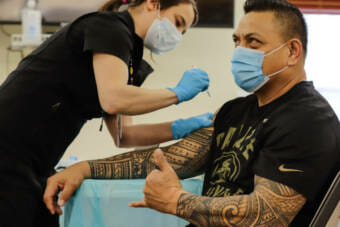 Pacific Islanders and Native Hawaiians have some of the lowest rates of vaccination against COVID-19 in Alaska — and highest rates of hospitalization and death. Community leaders have gotten creative to encourage vaccination.