It was a foggy Sunday morning when the 80-year-old tugboat left Gastineau Channel. A Coast Guard cutter towed the Lumberman out for her last trip to sea.

The black-and-yellow tugboat had long been a familiar sight in Juneau’s inland waters. She arrived in the late 1990s from Puget Sound and changed hands several times, decaying over the years to become a rustic liveaboard that skirted local laws.

“We had a dispute with the owner at the time that he couldn’t be there. He claimed that he was on state lands and had the right to be there,” Juneau’s Port Director Carl Uchytil told CoastAlaska.

Anchored on city-owned tidelands outside the harbor, the Lumberman sat in a jurisdictional no man’s land that was out of reach of local officials.

The vintage tug could often be seen from Juneau’s main highway with a collection of skiffs moored to her rusting hull. It became a magnet for people unable to find shelter in a community that’s long struggled with a lack of affordable housing.

“Of course, there was that unfortunate accident where two people perished going out to the Lumberman,” Uchytil said, referring to a December 2017 accident when a skiff carrying five people and a dog overturned while heading out to the tugboat. Two men were never found.

The city later moved to condemn the 192-ton vessel after she broke her anchor chain and drifted off state-owned tidelands.

But then came the question of whose responsibility it was. The owner was long out of the picture. The state didn’t want her. The Coast Guard didn’t consider her a navigation hazard. And scrapping her would have cost too much, so she sat for more than a year — abandoned — tied to a city dock.

“This is just the typical poster child of what a derelict vessel is,” Uchytil said, “where people aren’t responsible with their vessels, passing them from one person down to another.”

To date, the city’s Docks and Harbors spent about $160,000 to clean and prep and ultimately scuttle the ship. The Coast Guard spent close to $70,000 to remove hazardous materials.

Still, nobody really wanted to sink her. Juneau’s Docks & Harbors even appealed to the public for ideas for what could be done with the hulking beauty.

Uchytil says the community had a range of pie-in-the-sky ideas, from converting it into a beachfront fish-and-chips stand to a community flower garden.

“There was never an organization that said, ‘I’ll take it over, I have some funding, I will do this,’” he said.

That was three years ago. In all that time it would remain the city’s problem. Then last fall, federal regulators issued a permit green-lighting sinking the ship in about 8,400 feet of water.

The plan called for her to be towed about 55 miles west of Cross Sound. Uchytil worked with a salvage firm to rig the tugboat with remotely opening valves that could flood the 107-foot tug at a flick of a switch.

“We had consulted with a naval architect to make sure that the vessel would indeed flood and sink in that proposed spot,” he said.

A salvage crew headed out early on Sunday. At first, everything went according to plan. But Coast Guard Chief Petty Officer Kip Wadlow says that the flooded vessel didn’t completely sink. Her bow continued to bob up and down, protruding from the water’s surface.

“And then the John McCormick, a 154-foot fast response Coast Guard cutter, used its 25 mm deck gun to complete the sinking,” Wadlow said.

Within 15 seconds, the waters of the Pacific closed over the ship as she sank to the ocean floor — an inglorious end to the saga of the Lumberman.

In recent years, Juneau’s Assembly has since tightened up its anchoring rules on city-owned tidelands. And the Legislature passed a legislation requiring boats to be titled to tighten up the chain of ownership.

All in the name of cracking down on derelicts and sparing them the notoriety of becoming a public nuisance, like the 80-year-old Lumberman tug boat. 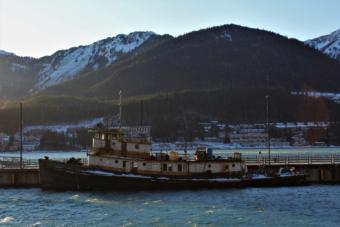 Strong winds and high tides caused the tugboat Lumberman to drag anchor and drift south, raising concerns that it could endanger private or public property. 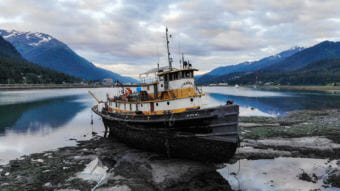 Do you have an idea for what to do with the Lumberman?

The deadline is May 3 for the public to submit suggestions for the most cost-effective way to dispose of the Lumberman. The tugboat is anchored on state tidelands across from Egan Drive.