In the summer of 2019, KTOO commissioned a source audit, or a report on the demographics of the people we talk to for KTOO news stories and the guests we have on Juneau Afternoon.

Now, we ask everyone who appears in a news story or is a guest on Juneau Afternoon to identify their gender and their race and/or ethnicity. We do this in order to understand whose voices we are relying on too much and whose voices we might be leaving out.

We’ve just finished compiling our 4th quarter report of 2020, which includes most of the lengthy election season, the arrival of the COVID-19 vaccine in Alaska, and extreme weather in Southeast Alaska that displaced dozens of people and killed two residents in Haines.

In total, 57% of our sources for the quarter were male. The percentage was slightly higher than that for news sources, but for Juneau Afternoon, female voices were the majority at 51%.

In the KTOO newsroom we are engaged in an ongoing conversation on including more female sources in our reporting, especially subject matter experts. It is especially difficult to keep the balance during events like a general election, where we don’t have any control over who is running for office or the fact that there are frequently more men than women in political races. 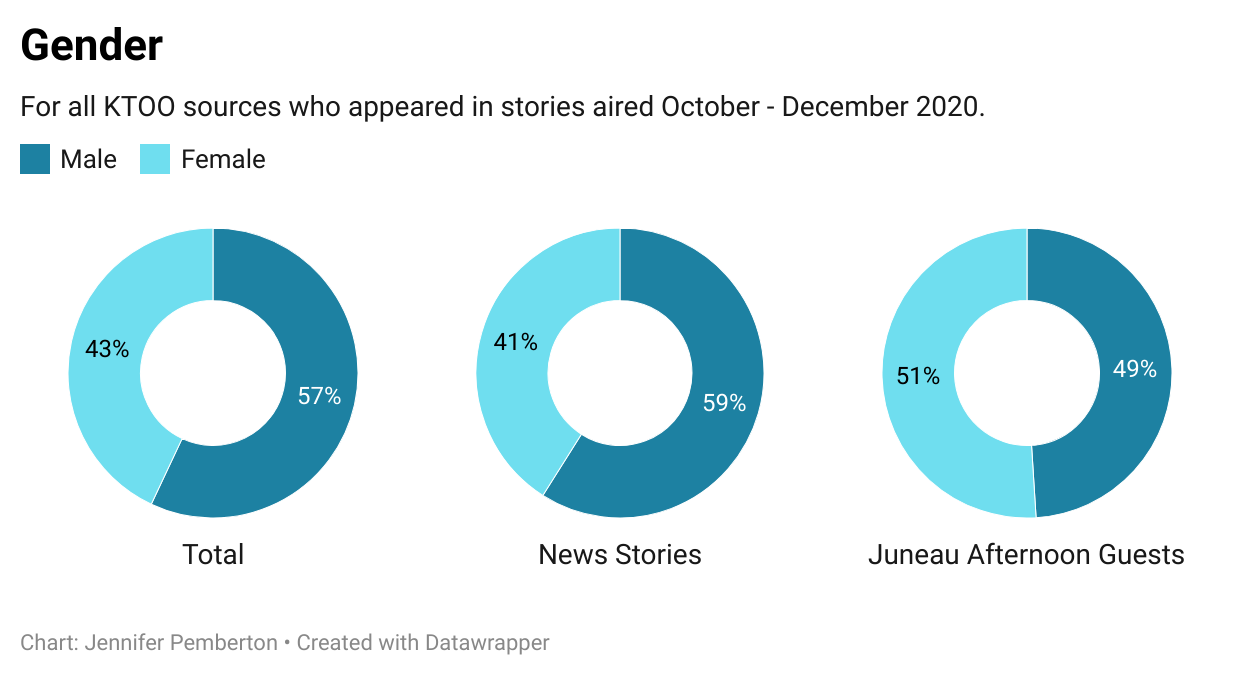 We always look at subject matter expertise at this point because it helps clarify some of the gender numbers. Most of the guests on Juneau Afternoon for the quarter were non-expert members of the general public, which means that they are not pre-sorted by gender in the same way that subject experts are.

For the news department, 39% of the sources were either elected officials or government spokespeople and 8% were politicians, who are more likely to be male. That makes sense given that all three months in the reporting period were dominated by election coverage.

In general, the number of our sources who identify as white-only has stayed roughly the same since we started reporting (between 75% and 84%) but at 72%, this period had the lowest overall. That’s mostly due to the weekly addition of Juneau Afternoon hosts from the Black Awareness Association of Juneau, which has made Black voices the majority on the program. Sources for news stories, however, were 85% white.

In the news department, the largest percentage of non-white sources was Alaska Native, at 8%.

Across all of our programs and stories, there continues to be very little in the way of Asian, Latinx and Hawaiian/Pacific Islander voices. This is especially concerning with the rise of hate crimes against members of the Asian American and Pacific Islander community in the past year. We know we need to do better. 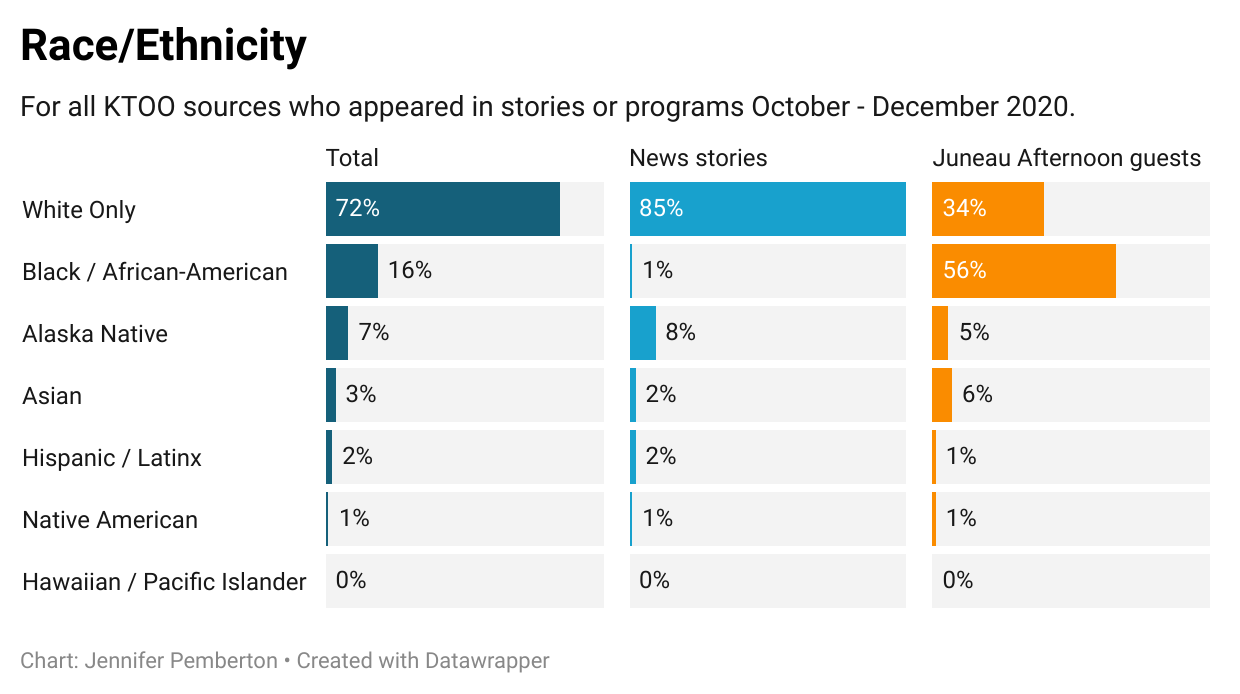 One thing we always look at when we look at the racial and ethnic make-up of our sources is the focus of the story. The mix changes when the story or program has a focus on race.

Stories that are not about race tend to feature the most white-only voices and we start to see Black and Indigenous sources appear in stronger numbers when the story addresses race or is about race. While this is one way to get more diverse voices on the air, it’s a very limited way of changing the overall inclusivity of our stories. 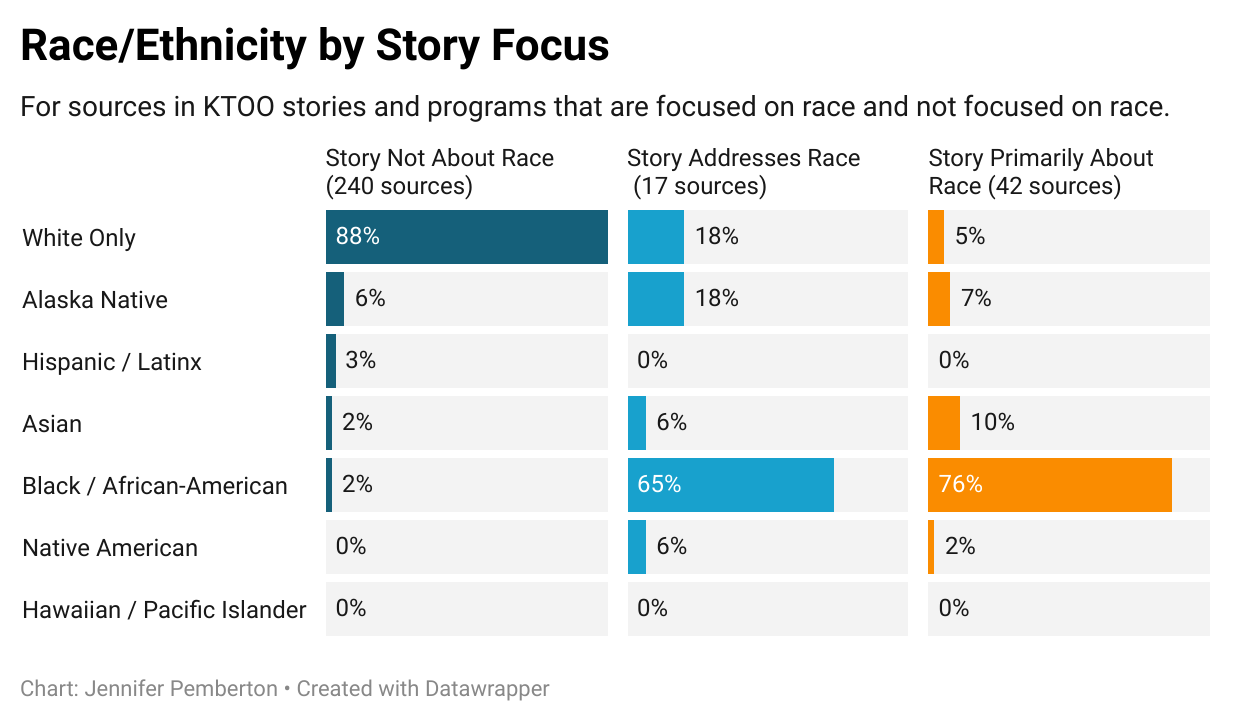 We’re learning Lingít , the Tlingit language! Thanks to a grant from the Alaska Community Foundation, the entire staff at KTOO is taking a semester-long language class with X̱ʼunei Lance Twitchell.

As a publicly owned media organization, it is our job to reflect the community we serve. Language is culture, and even with a very basic, entry-level understanding of the language, we hope we can do a better job at serving more of our audience’s informational needs. Also, as more places and individuals in our broadcast area reclaim their Lingít names, we have an obligation to properly pronounce them on the air, spell them correctly online and understand their meanings.

It will be interesting to see if this deeper understanding and connection to the land will yield new sources or story ideas for KTOO.