A small explosion was detected at the Mount Veniaminof volcano early Thursday morning. Veniaminof is on the Alaska Peninsula, north of Perryville.

Satellite and webcam footage revealed small deposits of ash near the summit. The ash cloud stayed below 10,000 feet.

The Alaska Volcano Observatory raised the aviation color code to orange to warn pilots in the area of possible ash emissions. Color code orange means there is heightened unrest at a volcano with an increased potential for eruption, but that the risk is limited.

Geologists observed sulfur in the area over the past few days and a rise in surface temperature Wednesday night.

Ash emissions and lava spray and flow are typical for Veniaminof. Ash usually stays contained in the summit crater but can occasionally fall in nearby areas. A satellite link at Port Heiden is out, so local seismic activity is offline at this time. The volcano observatory  continues to monitor the situation. 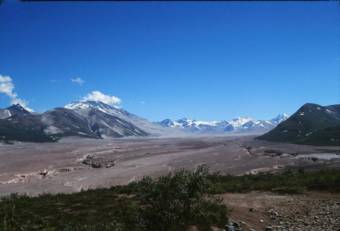 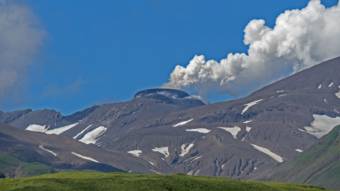 Lava streams from one Aleutian volcano, while two other volcanoes spew ash into the air

A stream of lava flowed down the side of the Great Sitkin volcano in the Aleutian Islands Thursday morning and was visible from the nearby community of Adak, an official with the Alaska Volcano Observatory said.