Alaska women who live in rural and remote communities usually travel to city centers to give birth — against incredible geographical odds. COVID-19 has made a hard trip even more daunting. A dramatic example of that is in Unalaska, where the only commuter airline went out of business during the pandemic. That is especially hard for pregnant women, who can’t postpone appointments.

Pregnant women don’t have the option to have a hospital birth in Unalaska. They’re referred out to hospitals on the mainland, usually about 800 miles away in Anchorage. They’re asked to leave at 36 weeks, but sometimes women wait too long.

“My call phone rang and dispatch said, ‘Hey, we’re just calling to tell you there’s a woman on our way to the clinic in labor,’” said Sara Spelsberg, a physician’s assistant at Iliuliuk Family Health Services Clinic in Unalaska.

She got the midnight call a few years ago, but the memory is fresh. She asked the dispatcher to send backup paramedics.

“I looked out the window and I saw a truck screaming into the parking lot,” she said.

“I’m in my pajamas, I don’t have gloves. I don’t have anything. I jumped into my flip flops. And I ran down the stairs outside. And I ran up to the car and I said, ‘Let me get a wheelchair and we’ll get you inside.’ And the mom said, ‘I don’t know if there’s time.’”

“It’s raining. It’s dark outside. It’s like 11 o’clock at night, and it’s cold. And this baby comes shooting out into my hands and his dad’s hands. We both caught him,” said Spelsberg.

The umbilical cord was wrapped around the baby’s neck. The baby was blue. Spelsberg described it as “Smurf” blue.

“I’ve been in medicine for a really long time. And I did not even know that people could be that shade of blue,” she said.

Bear in mind, even a medevac is a three-hour flight. It had been a decade since Spelsberg had delivered a baby

“I put his little feet in between my fingers, because I only have two hands, and I held him upside down and I used my other hand to unwrap the cord around his neck. And — I smacked him on the behind. And he started to cry. And he turned pink, and it was just the most beautiful cry sound I’ve ever heard in my life,” she said.

Paramedics showed up. Mom and baby were fine. That was before the pandemic.

COVID-19, and no regular air service

Health care professionals and moms say the threat of COVID-19 ratcheted up the anxiety factor of third trimester travel. Then Ravn Air, the airline that served the Aleutians with daily flights, went under in April. Providers were worried that type of scenario could play out again. (Ravn airlines resumed flights in November of 2020.)

“I had to just call moms and say, ‘I don’t know when we’re going to get you out. We’re working on it. We’ll keep you posted,’” said Jennifer Heller, a nurse midwife at the clinic.

To be clear, she says no one has gotten stuck giving birth on the island since that night.

“We did have some gaps in just regular, routine prenatal care and then getting women out for their routine but very important 20-week ultrasound, the women who were 20 weeks right about in those two months,” she said.

To get in and out, women had to charter flights. Heller says it took some explaining, but the clinic got the cost covered by Medicaid. It’s the source of coverage for more than half of women who give birth in Alaska. But everyone else has to pay for tickets. Heller says a charter flight will put you out $1,300 round trip, for one passenger. She spends a lot of time now writing to insurance companies on behalf of her patients to try and get charters covered.

And Medicaid will put you up in hospital housing, or a hotel if that’s not available. But if you want a kitchen or a little more space because Anchorage restaurants, stores, and other public spaces are shut down or restricted for COVID-19 — that will cost you.

She found out she was pregnant in December, just months before the pandemic really shook the nation. She was one of the moms whose prenatal care got delayed when RavnAir stopped flying. She ended up chartering a flight to her 20-week ultrasound.

“It’s always kind of like a crazy appointment anyway going in. And then it’s just like an additional anxiety going on,” said Dean.

Her baby was fine. She got to go home and wait until 36 weeks to return to Anchorage. But when she got there, she ended up staying in the city for 2 months. The baby was two weeks late, then they decided to hang around until after a first pediatric appointment rather than having to make the flight twice.

They had to charter another flight home — in a tiny plane, in a pandemic, through Bering Sea weather. With a newborn.

“So, you know, the plane’s tilting, and there’s like men on the plane screaming, and she’s just like, ‘this is awesome.’  She’s the best flyer,” Dean said.

“She’s kind of been, oddly, a rock through all this? Because she’s just phased by nothing.”

It’s a lot of miles and money and time. But this is the fix. The alternative is having babies outside — way outside — of a hospital setting. And Dean did have some complications in labor.  She ended up transferring from a birth center in the city to the hospital — an easy drive in Anchorage, but a high-stakes gamble from home.

She said her daughter, Morwenna, is fine. She’s still a rock. 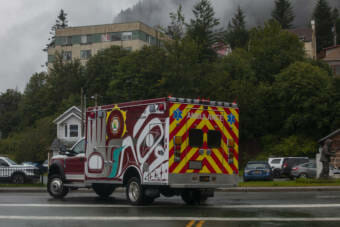 The CCFR fire chief said the program that provides general care and follow-up care in the field is one of the most exciting programs he’s seen after almost 30 years in fire service. 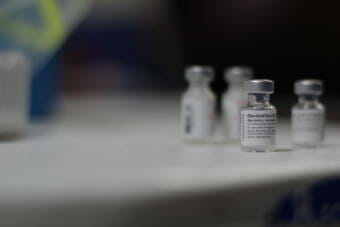 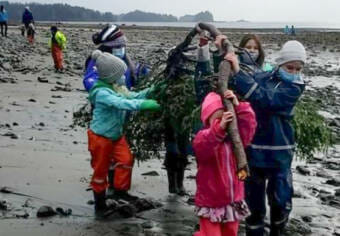 At Sitka herring camp, an advocate passes down subsistence traditions

Tom Gamble is determined to see subsistence harvesting of herring eggs continue — by working to protect herring stocks and teaching kids how to harvest eggs. This spring, he shared some of his knowledge in a herring camp for kids.