It’s been more than a month since a massive storm triggered a devastating landslide in Haines. Survivors and rescuers recounted the crucial first hours of getting Beach Road residents out of harm’s way.

The slide destroyed at least nine homes and killed two people. On Monday, the water was clear and rolling in a north wind. Snow covered the scar running down the side of Mount Riley.

That eerie calm almost concealed the violence of the Dec. 2 storm that lashed rain and brought down trees and the side of a mountain. Haines fisherman Gregg Bigsby was at home when he heard what happened. He jumped into his truck and headed to the harbor to a chaotic scene.

“[I] came down to the boat harbor and saw all the activity with the ambulances were parked down at the dock, and the helicopter was flying over, and boats were going out. So there was already three or four boats out there,” Bigsby says.

He warmed up the Rustler, his gillnetter/tender, and headed out with two other fishermen.

“There was trees going in every direction and we were constantly hitting stuff but we were just going slow so we’re just pushing it around,” he says.

They searched until it got so dark that they had to use a spotlight to maneuver around tree trunks. Bigsby points to a strip of sandy beach on the south side of the slide.

“So the way it went was, I came along here looking to see if I didn’t see anybody on the beach. But the harbor master’s skiff was shuttling people from the beach over on this side, on the east side, and just going back and forth, and they had it all together,” he says.

Assistant Harbormaster Henry Pollan sits at his computer by the fuel dock. It’s quiet in the small office and Pollan’s coveralls are dry. But on that day he was on a skiff in the freezing rain, helping residents off the beach.

“It all happened really fast. And it was incredible being able to work with such a tight crew. You know, when everything went down, people instinctively found their roles and did a really good job,” Pollan says.

He says the whole effort took about two and a half hours. He credits Beach Road residents with organizing the slide’s survivors on the beach to await rescue. Pollan and Harbormaster Shawn Bell used the harbor skiff to move people from the beach to a bigger vessel, the local tender Pavlof.

Pollan says he and Bell have had disaster training with first responders, but he also credits their efficacy with on-the-job training. He says running a small town harbor is usually the business of problem solving.

“We’re just used to looking at a disaster and knowing what to do next,” he says. “You know, a sinking boat or a broken dock or a log stuck in something and the tide’s going out or storm drains plugged or, you know, a truck stuck on the launch ramp and the tide’s coming in. I mean, this is just like one of a million scenarios that no one ever expected to happen that we had the pleasure of taking care of, here at work.”

Vanessa Wishstar, her husband Steve and their two young children were in the first group to be picked up off the beach.

“We were just flipped on that boat like salmon. Like it was really kind of humorous,” Wishstar laughs.

She had her youngest on her back in a baby carrier. They were all drenched after fleeing their home in the downpour. She says the rescue — and the rescuers — are all now a blur.

“I don’t even know exactly who they were; I just consider them like angels. I just remember seeing their faces. Like, oh my god, there’s just the feeling of safety. And a second to breathe of like, oh my god, we’re actually getting help,” she says.

Her home is just adjacent to the slide in what geologists are calling the red zone. She is still unable to return.

Residents to the far south of the slide have been cleared to visit their residences, but the only access is by sea. The borough is working to arrange a special geotechnical assessment of the area. Then it can make decisions about reestablishing the demolished roadway, reconnecting utilities and considering the re-occupancy of the remaining homes. 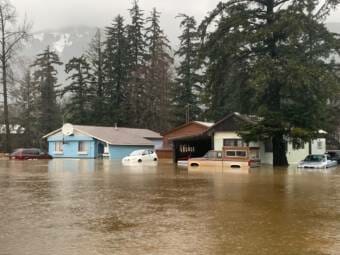 Gov. Mike Dunleavy has expanded the disaster declaration for the severe December storm swept through Southeast Alaska to include relief for individuals whose homes were damaged or destroyed. 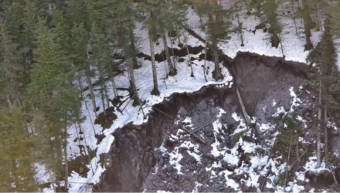 The unstable hillside above Beach Road led to the suspension of the search and rescue efforts and prevented many residents from returning to their homes. 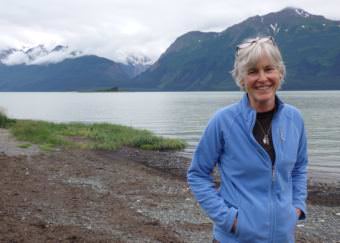 'It shook us to the core': Haines author Heather Lende on grief and recovery