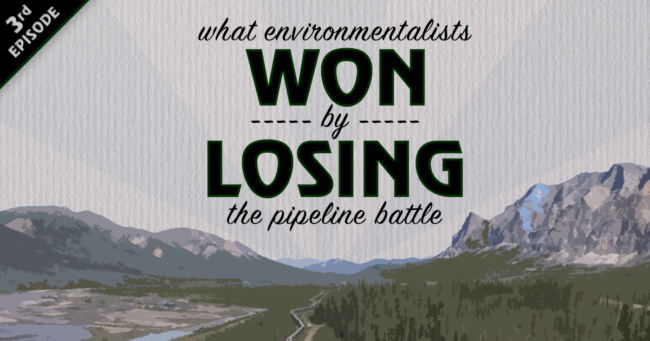 Sections of 48-inch pipe were already enroute to Alaska when an attorney in Washington, D.C. named Jim Moorman got a call. It was the founder of Friends of the Earth, asking if he could stop the pipeline. Moorman said he’d heard of the project. He’d read a newspaper article that made the pipeline sound like a horror show.

“It would melt the permafrost. It would create, on uphills and downhills, running slurry. The pipe would lose support and likely break. And the article suggested they’d just then move the pipe to the next valley and it’d all start over again,” he said. “It was a very alarming article.”

So the attorney looked for anything he might use to prevent this disaster. And he didn’t find much. In 1969, there were very few environmental laws. None that really applied to this situation.

Government could essentially permit a pipeline of whatever quality it deemed fit.

Then, Moorman says, a gift, from Capitol Hill.

“Shortly after the first of the year in 1970, I heard Congress had passed a new law, the National Environmental Policy Act,” he said.

Today, the National Environmental Policy Act, or NEPA, is a big deal. It requires an “environmental impact statement” for major projects that would alter the physical landscape. It allows ordinary people the opportunity to influence a project, and it’s been used as a tool, for delay in court. But when Congress passed NEPA in late 1969, the talk was all lofty, about making environment a national priority. The nuts and bolts of it? They were kind of beside the point. So it almost went unnoticed that the new law required federal agencies to write a “detailed statement” for each project it considers.

“That was a bit of bombshell for me,” he said.

That “detailed statement” though? Nobody knew what that meant exactly, or if the courts would enforce it. But Moorman’s clients, Friends of the Earth, The Wilderness Society and the Environmental Defense Fund, wanted to stop the pipeline, and they thought this new law could help.

In the spring of 1970, when the government was ready to issue permits, Moorman asked the Interior Department for its “detailed statement” on the pipeline.

What Moorman got back, the document that was supposed to list all the environmental effects of this trans-Alaska endeavor, was just eight pages.

The attorney remembers being nervous when the case went to court. In Alaska, workers were literally unloading pipe in the port of Valdez. But then – they won. The judge agreed the government’s impact statement was inadequate.

Moorman brought the largest project in Alaska history to a halt.

“I had a moment of euphoria,” he said. “The only other time I had such a feeling of euphoria is when I got married.”

The environmental lawsuit forced the oil companies to spend three more years and a small fortune on engineering, analysis and documentation. Gone was the idea of just putting a hot pipe in frozen ground. Engineers got to work designing elevated sections, insulated sections, sections on sliders so the pipe could flex in an earthquake.

In 1971 Sen. Ted Stevens said Congress, by passing NEPA, had forced them into a strange new set of procedures: “The final environmental impact statement filed by interior on the Alaska pipeline must be so complete as to be able to withstand any legal attack brought upon it in the courts.”

This was the birth of the encyclopedic Environmental Impact Statement we know today.

The government held hearings on the pipeline in Anchorage and Washington. Several thousand people testified or submitted comments, most of them against the project. You can practically hear the bureaucracy’s head exploding at the work it took just to listen to the public.

“Sitting in front of me is a set of transcripts from the Washington hearings,” said Interior official Jack Horton in 1971 with a stack of paper about six inches high. “What you’re seeing there is approximately one ninth of the total paperwork that the department will have to go through very thoroughly approximately 2500 to 3000 pages of transcripts.”

The final environmental impact statement stretched to nine volumes. Proponents said no project in American history had ever been so thoroughly scrutinized.

The Interior Department announced in the spring of 1972 it would grant permits. And the environmentalists? They went back to court.

It was now clear to pipeline supporters that the lawsuits could drag on for years. Some lawmakers decided: there was no time to let the NEPA challenge play out in court.

Sen. Mike Gravel was one of them.

He’s intensely proud of his work in 1973 to convince Congress to allow the pipeline.

“It was the most significant economic decision and political decision since statehood itself,” he said. “Nothing – nothing! – compares to it.”

He cast himself as a maverick of the Senate. Sen. Ted Stevens used to complain that he was a showboat. Alaska’s two senators kind of hated each other.

Gravel could be a show off, but he got the job done on this one.

There were bills to authorize the pipeline in both the House and Senate. Gravel wrote an amendment that said NEPA’s requirements had been met. That would have ended the lawsuit. Alaska Congressman Don Young, then in his freshman year, says Gravel was just trying to steal the victory for himself: “I thought he threatened the pipeline. He didn’t care. It was publicity.”

Young and Stevens thought they could get the NEPA waiver through the House bill and avoid a public vote on it in the Senate. Because doing an endrun around NEPA was very controversial. If Gravel lost the vote, that could have killed it and then there might never have been a trans-Alaska Pipeline.

In the end, the Senate vote was dead even. Vice president Spiro Agnew broke the tie.

Young doesn’t argue with Gravel’s success: “He lucked out and became a hero and God bless him.”

But even then, the bill might not have made it to the president’s desk if it weren’t for world events. The Arab oil embargo made an existing fuel shortage worse, and jacked up the price of gas. With the country in crisis, America decided it really did want Alaska’s oil, and in Congress, the last opposition to the Alaska Pipeline disappeared. The final bill passed with huge margins and President Richard Nixon signed it into law in November 1973, clearing the way for construction to begin. The result of that long fight is a pipeline that’s considered a wonder of engineering. And Maybe the Trans-Alaska Pipeline would have been well-engineered anyway, but it was NEPA that forced the oil companies and the government to prove it.