State wildlife officials say 62 wolves were taken during the 31-day harvest that ran from Nov. 15 to Dec. 15.

State biologists say they are comfortable with that number. Based on population estimates and previous harvest rates, the Alaska Department of Fish and Game expected that somewhere between 60 and 100 wolves would be taken this season.

From 1997 until 2019, Fish and Game used a quota-based system for wolf harvests. Starting in the 2019 season, the department switched to an opening-based system based on population estimates. The state estimated roughly 230 wolves lived on Prince of Wales Island and the surrounding islands as of the fall of 2021. Biologists aim for a population of between 150 and 200 wolves.

But environmental advocates are worried.

Collette Adkins is the carnivore conservation director for the Center for Biological Diversity, one of the groups fighting to list the Alexander Archipelago wolf as endangered.

“I mean, 60 something last year, (and) 60 something this year — these wolves are going to end up on the endangered species list if this type of trapping continues,” Adkins said.

Adkins said her organization would like to see trapping stop in Unit 2 altogether. But area trappers have other ideas — including moving the season to the spring, instead of the winter.

Trapper Devin Dalin submitted a letter to Ketchikan’s Fish and Game Advisory Committee explaining why he feels that the wolf harvest should be moved to the beginning of March. Dalin was a member of the committee until his term expired this past summer.

He also addressed the committee at a recent meeting.

“A lot of people have complained for years about ice in November, in December, and snow, and can’t access areas, bad weather, short days,” Dalin said.

Trappers also wouldn’t be in the field around the same time as duck or deer hunters. He says a spring season would avoid snaring deer during their critical breeding season.

“And moving into March, the deer have slowed down a lot,” he explained. “They’re not quite moving as much. They’re still moving but they’re not moving (in) quite a wide of a range where you would catch them in a snare quite as likely. They’re going to be laying a little bit lower.”

The Ketchikan advisory committee unanimously chose to support a spring trapping season. But Adkins, from the Center for Biological Diversity, said the idea comes with its own problems.

“That’s during the wolves’ breeding season,” she said. “It’s a particularly sensitive time for wolves, and there are so many other ways to protect deer from snaring.”

She suggested so-called breakaway devices that have a loop that breaks with a certain amount of force.

“So moving the trapping season to March would only make things worse for wolves,” Adkins said.

While the advisory committee supported the idea, it’s not scheduled for discussion by the Board of Game when it meets in Ketchikan on Jan. 20.

There are a few wolf-related items on the Board of Game’s agenda. One proposal from the Alaska Wildlife Alliance would nearly double the target wolf population to between 250 and 350 wolves. Others would change the way the population or harvest level are calculated.

A proposal from Ketchikan’s advisory committee would open the wolf hunting season Sept. 1 and set a five-wolf bag limit. Most wolves are killed by trappers, but an earlier hunting season would allow deer hunters to kill wolves they encounter.

It’s rare for a new wolf to find its way to Prince of Wales Island and breed with a member of the local population. 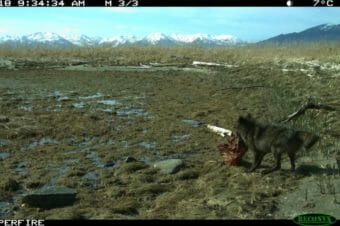 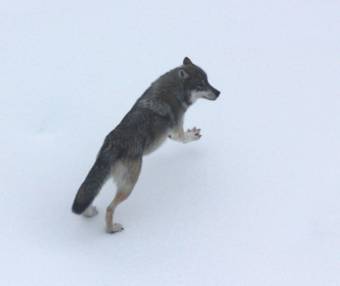